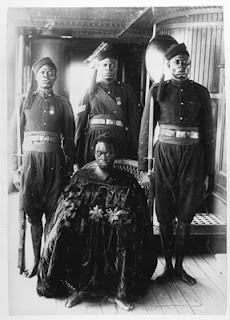 Overami or Ovonramwen was the last Oba or King of the African Kingdom of Benin, also sometimes referred to as the Benin Empire (not be confused with the modern country of Benin) which occupied an area mostly within what is now Nigeria. For many years prior to Ovonramwen coming to the throne British influence in the area had been expanding and strengthening but Benin remained independent but that independence, particularly the trade monopoly the Oba held in the region, aroused the jealousy of elite colonial investors and businessmen. They were determined to bring Benin with its palm-oil, rubber and ivory wealth under British control. Ovonramwen came to the throne in 1888 as the 35th Oba of Benin and in 1892 signed a treaty with the British to abolish the slave trade in the region and making the Kingdom of Benin an autonomous protectorate of Great Britain.

However, powerful forces were arrayed against the king, particularly the Vice-Consul James Robert Phillips and Captain Gallwey of the Oil Rivers Protectorate. Their goal was the full annexation of Benin to the British Empire and the overthrow of the Oba who stood in their way. In 1896 a British column led by Phillips went to meet with Oba Ovonramwen in Benin City but did not get to see the monarch who was occupied with performing important ceremonies at the time. Another expedition was launched despite warnings from the Oba not to come as their visit was timed to coincide with the celebration of the annual Igue Festival; a time of much ceremony when all outsiders were encouraged to stay away. The British were asked to postpone the visit for two months but Phillips refused and sent the king his stick; a traditional sign of insult and a deliberate provocation. As a result, when the party entered Benin territory they were ambushed and massacred with only a few managing to escape.

In February of 1897 the British launched a full-scale attack on Benin City which fell after eight days of fierce fighting. The Kingdom of Benin was totally destroyed, many inhabitants killed, the city looted and many valuable artifacts taken as trophies. The accused mastermind of the ambush and massacre of Captain Phillips and his party, Ologbohere, was put on trial and hanged. Oba Ovonramwen was to be hanged as well but after his surrender was deposed instead and exiled to Calabar with his two wives where he died in January of 1914. The king had actually had nothing to do with the massacre, knowing well enough that such an act would only provoke a war he could not hope to win, which is exactly what happened. The area of Benin was annexed and allowed for further British expansion into the interior of West Africa. However, despite the exile and death of the last reigning Oba of Benin the royal family continued on and still does today in the person of Crown Prince Solomon Akenzua who succeeded as Oba Erediauwa of the Benin people in Nigeria in 1978.
Posted by MadMonarchist at 12:33 AM