Obama Too Busy for King 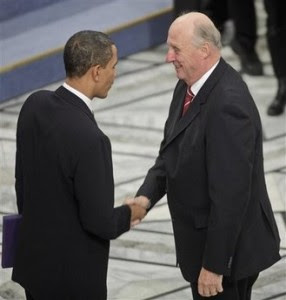 A rather insolent pattern is emerging regarding "The One" U.S. President Obama and the royals of the world. First there was Obama all but kotowing to the King of Saudi Arabia before barely giving a nod to the sovreign of America's most supportive ally Queen Elizabeth II of Great Britain. Later on, the Marxist-in-chief snubbed the XIV Dalai Lama for fear of offending the communist bandit government in China. This was followed by a technically improper but very reverential bow to the Emperor of Japan. Now, many Norwegians are upset that B. Hussein Obama refused an invitation by King Harald V of Norway to have lunch as is traditional for winners of the Nobel Peace Prize. He has also ruffled Norwegian feathers for refusing to attend other customary events. So what is the attentive monarchist to gather from this odd, inconsistent behavior? Bow to the Saudi King, snub the British Queen, snub the Dalai Lama, bow to the Japanese Emperor and snub the King of Norway... hmmmm... The only possible conclusion I can come to is that Obama only shows respect to the monarchs of people who have attacked the United States within the last hundred years. As Obama's own Democrat party used to constantly point out the majority of the 9-11 hijackers were from Saudi Arabia as is Osama bin Laden himself. We also recently passed the anniversary of the Japanese attack on Pearl Harbor on December 7, 1941.
Am I being a tad unfair? Probably. The King of Saudi Arabia and the Emperor of Japan had nothing to do with those tragic events but for a President who is constantly being accused of selling out long-standing allies while trying to make nice with the enemies of America I cannot help but notice which monarchs he bows to and which he chooses to brush off. Probably all just a coincidence I'm sure, after all Obama was probably occupied with his acceptance speech for the Nobel Peace Prize in which he had to defend his sending of 30,000 more troops to one of the two wars he is engaged in and then go on to remind the world why sometimes warfare is needed and beneficial. Which is true, but probably not the sort of thing one expects to hear in an acceptance speech for someone getting the Nobel Peace Prize. So, I guess the moral of the story is that if you want President Obama to bow to you, first induce some of your countrymen to attack the U.S. at some point and if you want to win the Nobel Prize for Peace you need to send more troops to war.
And I'm the one who's crazy?!
In any event, at least the royals on hand behaved with all of the dignity and civility one would expect and in an effort to leave on a high note I will close with this picture of the lovely Crown Princess Victoria of Sweden looking very regal in her purple dress and matching jewels. 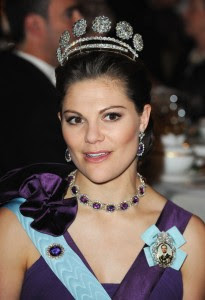