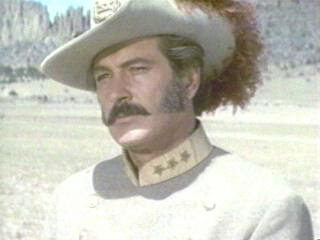 "The Undefeated" came out in 1969 and was directed by John Ford student Andrew V. McLaglen. It is a fairly unambitious but still entertaining movie that starts just as the American Civil War is ending. John Wayne stars as Union Colonel John Henry Thomas who resigns from the army after the war and takes his remaining men out west to round up wild mustangs to sell to the US Army as a way of repaying his men for their wartime service. They are joined by a number of Indians recruited by his adopted Indian son Blue Boy. When government agents try to cheat them they accept a better offer from the representatives of Emperor Maximilian of Mexico to get top dollar in return for driving the herd to Mexico. The federal agents try to stop them but are unsuccessful.

While driving the herd into Mexico they cross paths with a group of former Confederates and their families led by Colonel James Langdon (Rock Hudson). Unwilling to admit defeat and angered by scalawags and Yankee carpetbaggers taking over the south the group packed up to head for Mexico. When Thomas finds them they are on their way to Durango where they will enter the service of Emperor Maximilian. The Yankees help their former Confederate foes fight off a bandit attack (all parties using weapons that are totally historically inaccurate) and to celebrate the Confederates invite the Yankees to a 4th of July party (rather odd considering that the south did not celebrate the 4th again until World War I as it marked the day the fortress city of Vicksburg, Mississippi was starved into submission) and a violent but still good natured brawl finishes the day off.

This point also sees the start of a painfully absurd effort at a romantic subplot between Blue Boy and the Confederate colonel's daughter Charlotte -the less said about that the better. The two sides part on friendly terms though trouble is in the air when the bodies of the French troops sent to escort the Confederates are found slaughtered by the Juaristas by Colonel Thomas. Nonetheless they push on to Durango where they are welcomed by one General Rojas (Tony Aguilar) with a mariachi band playing a Latino version of "Dixie". However, at the height of the celebration the flags change and Rojas reveals that he is actually a Juarista. He takes all the Confederates prisoner and threatens to massacre them all, soldiers and civilians alike, unless Langdon can convince Thomas to turn over his herd of horses to the Juaristas. The French find out about this and naturally try to stop Thomas from turning the animals over to the enemy.

This is where the republican bias makes for some confusion. The unseen Emperor Maximilian has been nothing but honest and generous with all parties whereas the republican revolutionaries are shown executing French prisoners, blackmail Thomas and threaten the mass murder of all of Langdon's people after kidnapping them by deception. Despite all of this they still try to portray Rojas as a basically good guy rather than a villain -which obviously doesn't really work. Reluctant as they try to make Rojas theft, blackmail and the threat of mass murder is simply not something I would think most viewers could get past. However, this is a movie without any real villains other than the bandits. Some minor efforts are made to make the French seem wicked but we never actually see them do anything wrong. Both sides, north and south, are portrayed sympathetically when it comes to the Americans though they do have to make one of the Confederates a jerk.

On the whole, "The Undefeated" is a good, entertaining little western though it does have its annoyances and the usual inaccuracies. I found the ending most absurd of all as they try to have everyone part as friends and given the actions of General Rojas mentioned above I simply cannot see that happening in real life. But, of course, this is a western and not real life. Wayne and Hudson give their typically good performances, there is some humor splashed throughout though I will assume it was unintended that I laughed at the fight scene between Thomas and Langdon when John Wayne, the quintessential macho-man American, gets punched in the face by the gayest man in Hollywood of his day. As I said, I think it is a good movie, not a great one, but for what it is "The Undefeated" is a fine little western that probably gives a more accurate portrayal of the Juarez/Maximilian struggle than the filmmakers intended.

Posted by MadMonarchist at 12:29 AM