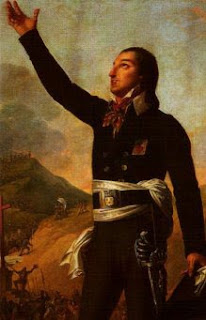 Louis-Marie de Salgues Marquis de Lescure was born on October 13, 1766 at Versailles into a noble family hailing from the Albigenses region of southern France. The struggling aristocracy often seems to produce the best loyalists and as he grew older Lescure made a good match, marrying in 1791 a cousin of another future famous royalist leader Henri de la Rochejaquelein. He attended the military academy from the age of 16 and early on was known for being very quiet, shy, brilliant and extremely religious but of the more austere type rather than the 'show-off' religious which was all too common at the time. He worked his way up to command a cavalry company just prior to the outbreak of the French Revolution.

At first, Lescure thought perhaps some good might come from the revolt, recognizing that many people were suffering. However, after the Royal Family came under attack his sacred loyalty to his Most Christian King demanded he resist. Fearing arrest he left the country for a short time as an emigre but soon returned. He defended the Tuileries from the republican mob and later sheltered many friends and family members from the horrors of the Terror. When the revolutionaries tried to conscript loyal peasants into their republican army they rose up in opposition and looked to their nobility to lead them, including the Marquis Lescure. Joining with de la Rochejaquelein he was from the outset one of the top commanders of the royalist army.

He was arrested by the republicans who knew he would be one of the first to oppose them but his fellow royalists liberated him and he led his faithful troops into battle at Thouars, took Fontenay-le-comte and Saumur where he was wounded, always leading from the front and showing great courage. At Torfu, the last counterrevolutionary success on the left bank of the Loire, he rallied his troops saying, "Are there four hundred men brave men who will come and die with me?" to which his dispirited soldiers renewed their energy and shouted as one, "Yes, monsieur l'Marquis!" Repulsed at Nantes, the Vendee royalist rebels went on to other victories at Tiffauges and Cholet before moving to the area of Chatillon.

During this time the Catholic and Royal Army was opposed by the revolutionary General Francois Joseph Westermann, one of the most successful and utterly ruthless commanders on the republican side. As both sides battled for Chatillon, the place changing hands numerous times, Marquis de Lescure was badly wounded and after enduring terrible suffering died on November 4, 1793. His beloved wife left very touching accounts of her attentive care of her husband throughout these trials and her heartbreak at his loss. He was buried in an unmarked grave so the republicans could not violate it and Lescure was hailed by his soldiers as the "Saint of Poitou". For his character, skill, devotion, courage and steadfast loyalty to his God and his King Louis Marie de Lescure deserves a place of honor in the pantheon of great heroes for faith and monarchy in the Kingdom of France.
Posted by MadMonarchist at 1:18 AM