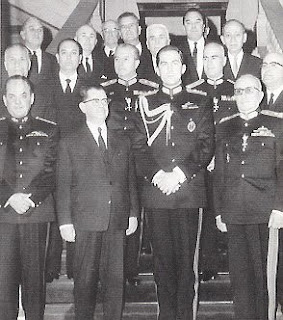 It was on this day in 1967 that HM King Constantine II of Greece launched his attempt at a royalist coup to re-take the government from the military junta that had been in power since launching a coup of their own that spring. The military had sought the support of the Greek monarch and most of the troops who participated in the initial military takeover thought they were acting on the King's orders. Once it was an accomplished fact Constantine II had little choice but to go along with it and bide his time until the right moment to remove the colonels from power. The date chosen was December 13, 1967. The King and Royal Family went to Kavala where he rallied loyal officers, always adamant that there be no bloodshed. Because of this, he tried to organize his coup from the top, dealing only with royalist army commanders and not attempting to incite a popular uprising against the junta. This would prove to be critical as he was essentially risking everything on the loyalty of the chain of command. In the event, not all officers proved as faithful as their generals who took the side of their monarch. Field officers loyal to the military regime turned on their generals and arrested those who supported the King. Constantine II and his family were forced to flee to Rome where he continued to assert that he was the rightful King of the Hellenes and put his faith in popular support. However, obtaining and keeping popular support in a country under military rule is a difficult thing but Constantine was firm about his choice, even turning down an offer from the junta to have him back if he would drop his democratic advocacy. The King refused and when the junta was overthrown and a vote organized, it was a vote to remove Constantine II as the nominal Greek monarch. The King remains in exile to this day, stating when asked his preference for a limited monarchy but fully accepting of the republican government as the legitimate authority in Greece.

Posted by MadMonarchist at 4:00 AM