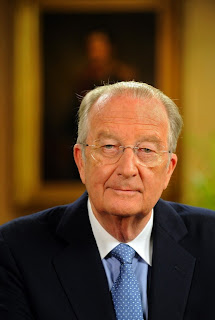 His Majesty King Albert II of the Belgians has responded to the particular hardships the recent extreme cold have brought in a practical way for some of the least of his subjects. Two homeless families, suffering from the especially harsh winter, have been taken in by the monarch and given shelter at the Royal Trust properties in the royal apartments at the castle in Ciergnon Ardennes. Secretary of State Philippe Courard commented that, "This is truly the will of the King and the royal family to this provision. I emphasize this strong positive step in the right direction." Homeless people have been appealing for shelter from the government in the harsh conditions this year, some sleeping in train stations. Many of the homeless are people who have applied for political asylum in Belgium. Putting all other issues aside King Albert II has displayed the best attitude of the Christmas season, giving shelter to those in need.
Posted by MadMonarchist at 8:34 AM