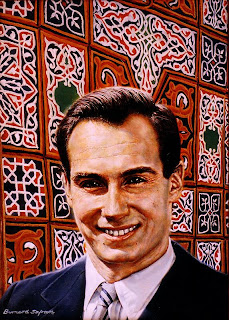 His Highness* Shah Karim al-Hussayni the Fourth Aga Khan was born Prince Karim Aga Khan on December 13, 1936 to HH Prince Aly Khan and his first wife Princess Tajuddawlah Aly Khan in Switzerland. Although he was premature he was healthy and developed normally. His parents divorced in 1949 after which his father married his most famous wife the American actress Rita Hayworth. He spent much of his childhood in Kenya, educated by private tutors employed by his grandfather. He later went to school in Switzerland and graduated from Harvard with a BA in Islamic history. He also acquired a love for winter sports and participated in two Olympic games on the teams of Turkey and Iran as a skier.

He was 20-years-old when his grandfather died and he succeeded him as the fourth Aga Khan, 49th hereditary Imam of the Ismaili Muslims of the Shia branch of the religion. His was a somewhat controversial succession as his father and an uncle were in line ahead of him. However, the Third Aga Khan named his grandson as his chosen successor in his will because of how rapidly the world had changed during his lifetime and he felt that a young, modern man like Prince Karim would be better equipped to carry out his social and religious duties than those of the previous generation. Nonetheless, the new Aga Khan stated he would continue in the footsteps of his grandfather to work to improve the lives of Ismaili Muslims.

As the Ismailis are a minority in the nations through which they are scattered around the world it is no surprise that the Aga Khan has been a major voice advocating racial tolerance and harmony as well as his humanitarian efforts to improve the lives of his people and others, showing particular concern in the areas emerging from colonial rule to independence. He has also, by both nature and necessity, been a prominent voice in the Islamic world calling for religious tolerance and peaceful dialogue between religions.

In his private life the Aga Khan has not had an easy time of things. He married his first wife in 1969 by whom he had three children before divorcing in 1995. In 1998 he married again, had another son, but announced another divorce in 2007. That year did bring some celebration though as His Highness celebrated his Golden Jubilee as Aga Khan with representatives of the Ismaili community coming to pay homage to their hereditary Imam and the Aga Khan himself then embarking on a world tour of Ismaili communities to thank them for all of their loyalty and support over the years.

Aside from his considerable humanitarian work the Aga Khan has been of great service in his efforts to preserve Islamic architecture which is often threatened by gross, modernist monstrosities, as well as Islamic art and has been an important defender of the status of women in Islamic societies. He has spoken of the way religion touches all aspects of life for Muslims whereas in many “Christian” countries religion is kept strictly separate from the way most people live their lives. He noted, of course, that this is not universal but is the prevailing norm. In that regard even Christians could be well served by listening to the Aga Khan and perhaps reflecting on the degree to which the Christian world has abandoned or forgotten their faith.
(*the Aga Khan was granted the style of 'His Highness' by Queen Elizabeth II of Great Britain and 'His Royal Highness' by the late Shah of Iran)
Posted by MadMonarchist at 3:20 AM