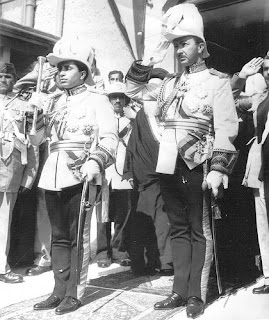 One of the key figures in the late history of the Kingdom of Iraq was the Prince-Regent Abd al-Ilah. Born in 1913 he was the son of King Ali ibn Hussein of the Hejaz, a nephew of King Faisal I of Iraq and a cousin and the brother-in-law of King Ghazi of Iraq. On April 4, 1939 he began his service as regent of Iraq for King Faisal II following the death of King Ghazi in an auto accident. From early on, as had the monarchs before him, Prince Regent Abd al-Ilah was criticized for his government policy of friendship and cooperation with the British Empire. During World War II he was overthrown for a time by anti-British forces who were allied with Nazi Germany. British troops were deployed and the Prince-Regent called on the Iraqis to rise up against the pro-Axis government. Eventually the regime fell and the ringleader, Rashid Ali al-Kaylani, fled to Persia.

Prince Abd al-Ilah was restored to power and afterwards strengthened the alliance with Great Britain as well as establishing friendly relations with the United States of America. He even visited America where he was given the Legion of Merit by President Harry Truman. In 1953 King Faisal II came of age and the regency was ended, however, Prince Abd al-Ilah continued to be a primary advisor to the young monarch and as such kept up his support for keeping good relations with the west. He supported the adoption of the Baghdad Pact with Great Britain and other powers in the Middle East as well as the formation of a monarchist coalition of powers (the Hashemite kingdoms of Iraq and Jordan) rather than joining in the United Arab Republic dominated by Egypt and pan-Arab nationalists.

All of these positions and policies made the Prince a particular enemy of the radical forces that stood opposed to the Hashemite Kingdom of Iraq and included Islamic fundamentalists, xenophobic nationalists and pan-Arab progressives. As such, on July 14, 1958 when the violent coup was launched that saw the overthrow of the Iraqi monarchy and the massacre of the Iraqi royal family Prince Abd al-Ilah was singled out for particular cruelty, being murdered, his body desecrated and finally mutilated before being burned by a mob whipped into a frenzy of bloodlust by the revolutionary gang of traitors. Perhaps, in the future, the government of Iraq will admit the immense crime that was done to the Hashemites and rehabilitate the memory if not fully coming to their senses and restoring the monarchy.
Posted by MadMonarchist at 10:06 AM