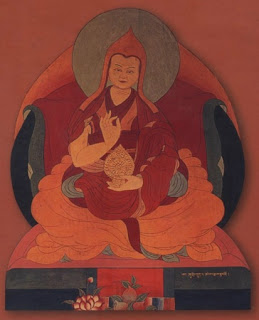 Tsangyang Gyatso, the Sixth Dalai Lama, had a very unique reign to say the least. He was born in 1682 in Mon Tawang, the region now known as Arunachal Pradesh in India. His parents were Tashi Tenzin and Tsewang Lhamo. It was an unsettled time for Tibet after the passing of the Great Fifth and the Potala palace was still being completed. Knowing this would be a dangerous time, the Great Fifth left instructions that his death was to be kept secret for 15 years; instructions which Desi Sangye Gyatso carried out to the letter. As far as the general public was concerned the Great Fifth was on an extended religious retreat. On important occasions the ceremonial gown of the Dalai Lama was placed on the throne to symbolize the presence of the sovereign. However, when Mongol princes demanded an audience with the Dalai the monks had to resort to using an impersonator; an elderly monk named Depa Deyrab of Namgyal Monastery who looked something like the Great Fifth and who would wear a hat and eyeshadow to help mask his appearance.

This charade was maintained until word came that a boy from the area of Mon had shown signs of being the reincarnation of the Great Fifth. Desi sent investigators to visit the boy in 1688. He was then moved to Nankartse near Lhasa where he was educated until 1697 when Desi sent one of his ministers, Shabdrung Ngawang Shonu, to inform the Manchu Emperor Kangxi of the death of the Great Fifth and the discovery of his reincarnation. Once this was done the 14-year-old Tsangyang Gyatso was openly proclaimed the Buddha of Compassion, the Wish Fulfilling Gem, the VI Dalai Lama of Tibet. There was great public rejoicing and no anger over the years of elaborate deception. As the people said, they were grateful to have been spared, “lamenting the setting of the sun and, instead, making them rejoice in its rising”.

The Fifth Panchen Lama was called in to administer the vows to the new Dalai Lama as a novice monk. Trouble was never far away though as in 1701 Desi Sangya Gyatso was killed in a conflict with Lhasang Khan. The Sixth Dalai Lama did not lead the conventional sort of life for a monk. He left his monastic life, never becoming fully ordained, and preferred to live outdoors. He even visited the Panchen Lama to renounce his vows as a novice; rather unorthodox to say the least but none of which effected his position as Tibetan sovereign. Although the Potala Palace was his official residence, the Dalai Lama spent most of his time living in a tent with friends behind the palace, visiting people in Lhasa and nearby areas. Some of his compositions are still popular in Tibet to this day.

Although unconventional the Sixth Dalai Lama became a beloved figure, spending his days camped out with friends writing poetry and his nights in local taverns drinking and singing songs. The people saw him as a sort of flamboyant romantic figure. In 1706 he was invited to China by the Qing Emperor but died while on his way to Peking.
Posted by MadMonarchist at 12:52 AM