Accession of King Albert I 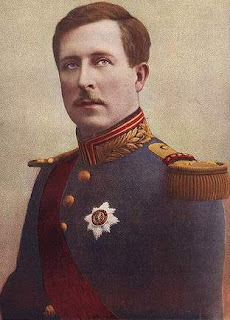 The Cross of Laeken details the centenary of the accession of King Albert I of the Belgians, the gallant "soldier-king" who led his nation in their heroic resistance to the German invasion during World War I. The late monarch stands out as one of the illustrious few who was "every inch a king" being regal with the 'common touch', courageous in war, leading his troops at the front, devoted to his family and sincerely religious. His noble example inspired not only the Belgian people but also many others around the world among the Allied powers during the Great War.
Posted by MadMonarchist at 11:45 AM

Email ThisBlogThis!Share to TwitterShare to FacebookShare to Pinterest
Labels: Albert I, Belgium, centenary