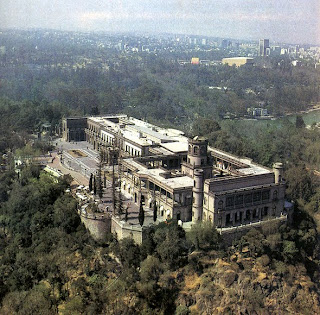 Chapultepec Castle is one of the preeminent sites for monarchists in Mexico and has a much more natural and sleepy beauty than the imposing National Palace in downtown Mexico City. The name 'Chapultepec' comes from the Aztec language meaning 'hill of the grasshoppers'. Construction of the castle first began as a country residence by the Spanish Viceroy Don Bernardo de Galvez, probably best known for his leadership of the Spanish intervention in the American War for Independence. The important port island of Galveston, Texas is named in his honor. The building began in 1725 on the top of the hill where the feathered emperors of the Aztecs once had a summer residence. In the old days it was beyond the confines of Mexico City though thanks to urban sprawl it is well within the city today.

In 1806 the castle was purchased by Mexico City and after the war for independence it became home to the Mexican MilitaryAcademy. During the Mexican-American War it was the site of fierce fighting and one of the most remembered and revered events in Mexican history when a number of young cadets fought to the death against the attacking U.S. Marines. One wrapped himself in the Mexican flag and jumped off the walls to his death rather than surrender. For this they became known as the "Boy Heroes" and a monument honoring them now stands near the castle in Chapultepec park.

However, the castle then was somewhat dissimilar to what stands today and that is thanks to the Emperor Maximilian. When the Hapsburg monarch arrived in Mexico in 1864 he found the National Palace unsatisfactory and ordered Chapultepec Castle refurbished, restored and made into his primary residence. He brought in the best architects from across Mexico and Europe to work on the project and ordered the construction of a new avenue to connect the castle with Mexico City which he named in honor of his wife 'Paseo de la Emperatriz'. Today this, the most significant and famous roadway in Mexico City, is called the 'Paseo de la Reforma' thanks to President Benito Juarez. It was at Chapultepec Castle that many if not most of the important events of the reign of Emperor Maximilian took place and it is still much the way he had left it with portraits of himself, the French Imperial couple and his wife Empress Carlota decorating the walls.

After the tragic fall of Emperor Maximilian Chapultepec Castle went unused for a time and then became in succession an observatory, a military college again, an episcopal residence and finally a presidential residence during the administration of the dictatorial Porfirio Diaz. Other Mexican presidents made use of it and later it became a residence for visiting dignitaries. Finally, in 1939 President Lazaro Cardenas made the castle the national history museum of Mexico. It is, however, still used for official events from time to time. The castle is an awesome sight, sitting like an island of serenity in the hustle and bustle of Mexico City, still seemingly haunted by the memory of the tragic couple Maximilian and Carlota. 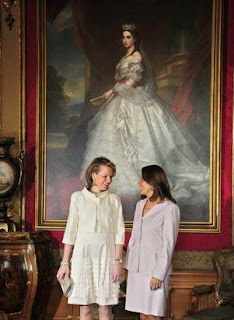 Crown Princess Matthilda of Belgium and Mexican First Lady Calderon in Chapultepec Castle below the portrait of Mexico's Belgian Empress Carlota
Posted by MadMonarchist at 12:48 AM