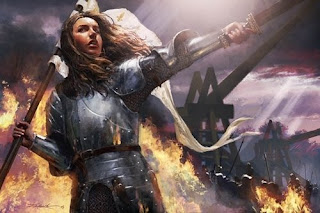 It was on this day in 1429 that St Joan of Arc arrived at the siege of Orleans. Regardless of background, the person of Joan of Arc must stand out as one of the greatest individuals of all time. Also regardless of background it would be impossible to explain the life of St Joan of Arc without accepting that some divine intervention had to be involved. How else would one explain an illiterate peasant girl of the Middle Ages not only rising to command the armies of France but leading them to victory in battle after battle? Even hardened veterans of the Hundred Years War who were first reluctant in the extreme to follow a teenage girl into battle learned the hard way that when they followed her orders they won and when they did not things never turned out well. She was also a staunch monarchist, a part of her story that is often left out, as the whole point of her mission was to see the legitimate monarch, Charles VII, crowned King of France. In fact, she proved her level of devotion by the fact that she remained ever loyal to her King even when that King was not always loyal to her.

The siege of Orleans was the first great victory in the military career of St Joan of Arc. After her arrival she aided in the attack on Fort St Loup and immediately urged an all-out assault on Les Tourelles, a fortified bastion on the opposite bank of the Loire River. The French commanders were reluctant to take the risk but Joan led the attack anyway and in the process was badly wounded. The English thought they had killed her but Joan pulled the arrow out herself and returned to the fight and Les Tourelles was taken and the English commander drowned in the river. The next day the English forces turned out to attack and the French formed up to meet them though Joan was against doing battle on a Sunday. She prayed that they would be spared more bloodshed and to the surprise of everyone the entire English army abandoned Orleans and retreated. The city was saved, Joan was the hero of France and after clearing the Loire valley of English troops Charles VII was taken to Rheims and crowned King of France alongside the slight teenage girl who was his champion.
Vive l'Roi!
Posted by MadMonarchist at 12:39 AM