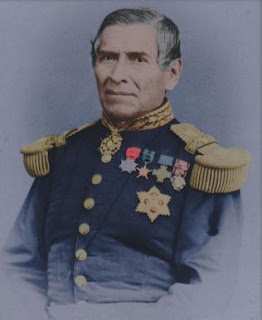 Juan Almonte was born in 1803 in what was then the Kingdom of Michoacan in New Spain (Mexico). After studying in the United States he returned home to join the independence movement of Vicente Guerrero. He was the first Mexican envoy to Great Britain and served in the National Congress where he was part of the liberal faction opposed to President Anastasio Bustamante. He was greatly concerned by the influx of immigrants from the United States in the northern province of Texas and when rebellion broke out there he served on the staff of the President/dictator General Antonio Lopez de Santa Anna. He saw service at the Alamo and acted as interpreter following the Mexican defeat at San Jacinto in 1836. In 1839 he headed the Mexican mission to Belgium and in 1840 was Secretary of War under Bustamante who he had earlier opposed. Life experience had made Almonte an increasingly traditional conservative.

Almonte was ambassador to the US in the follow-up to the Mexican-American War. Afterwards he went to Europe again where he continued to support the conservative Catholic faction in the "Reform War" in Mexico. He also joined the other Mexican exiles in advocating for a restoration of the Mexican monarchy. When the French Emperor Napoleon III decided to intervene he accompanied the French forces back to Mexico and was installed as temporary head-of-state in the provisional government that offered the throne to Archduke Maximilian of Austria. His time in power was marked by the repeal of the anti-clerical policies of the liberal President Benito Juarez and the restoration of the full rights of the Church. After the arrival of Emperor Maximilian Juan Almonte was made a major general in the Imperial Mexican Army and awarded the Order of Our Lady of Guadalupe. Emperor Maximilian entrusted him with the vital post of ambassador to France. He died in Paris in 1869 only three years after the fall of the monarchy he had struggled so long to see restored.

Posted by MadMonarchist at 12:25 AM