MM Tribute: Queen of the Confederacy 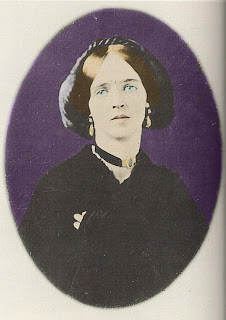 Lucy Holcombe Pickens of Marshall, Texas was the southern belle of all southern belles during that last period of southern grace and chivalry in North America. She followed the traditional route for well-to-do southern girls, going to finishing school and becoming as well educated as she was well mannered. She was also hailed as the most beautiful girl in the south and so it was no surprise that she was engaged very quickly. However, disaster struck the 19-year-old bride-to-be when her fiance was killed in a filibuster invasion of Cuba (in those days invading Cuba was the most popular southern form of recreation). She was crushed and decided that from then on she was going to make every day count and appreciate life because you never knew when it would be cut short.

While visiting Virginia she met the 48-year-old widower Francis Pickens, a wealthy planter from South Carolina. He was smitten immediately and begged Lucy to marry him, promising her the world. Wanting to see some of that she said she would accept if he could get appointed ambassador to some glamorous court. Properly motivated Pickens called in his political favors and was appointed ambassador to the court of the Czar of Russia. As promised, Lucy married Pickens in 1858 just before they left for St Petersburg.

The intelligent, lovely and vivacious Texan was an instant hit at the Russian imperial court and when the Pickens first child was born at the Winter Palace the Czar and Czarina were godparents and the girl was named Olga Neva Francesca Eugenia Dorothea Pickens. The adoring Czar and Czarina named the child "Douschka" or "darling". In 1860 the family returned to South Carolina where Francis Pickens was elected Governor on a platform of defending state sovereignty. That same year, after the national election, South Carolina became the first state to secede and the War Between the States broke out soon after. The Pickens had an honored position in the new Confederacy as the leaders of the first state to secede and Lucy was pretty famous in southern society to begin with and she was soon hailed as "Queen of the Confederacy".

Lucy did great work during the war. She donated her own silver and jewels to raise and equip a regiment of volunteers known as the Holcombe Legion in her honor. Their flag also displayed the Lone Star of Texas in honor of the home state of their patroness. Lucy also had the disntiction of being the only woman featured on Confederate currency and Confederate treasury bonds. After the war she continued to champion the southern cause by helping veterans organizations and honoring the memory of the fallen southern soldiers. She died in 1899, beloved by all as the most celebrated lady in the land of Dixie.

Posted by MadMonarchist at 12:45 AM