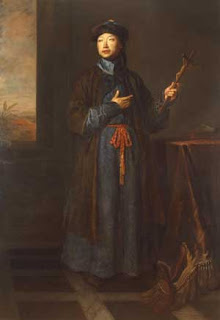 Michael Shen Fu-Tsung was a Catholic convert, born in China and who left via the Portuguese port of Macau in 1682. He visited many countries in Europe and accompanied a Belgian priest to Britain; the first Chinese person known to have visited Great Britain. He reportedly taught King Louis XIV how to eat with chopsticks while visiting Versailles and was presented to King James II of Great Britain. King James was so taken with the Chinese scholar that he had a full-length portrait of him painted which King James hung in his bedroom. He left England in 1688 (just in time you could say) and sailed to Lisbon, Portugal where he entered the Society of Jesus. He was evidently supposed to return to China to carry out missionary work with the other Jesuits there but, alas, he died during the voyage somewhere off the east coast of Africa. It would be well over a hundred years later before anyone from Great Britain visited China in an official capacity. That was Lord MacCartney who, unlike President Obama, caused outrage (in China at least) for his refusal to kotow to the Qienlong Emperor in the traditional fashion. I suppose it did not matter but, for the record, Qianlong is widely considered one of the greatest emperors of the Qing dynasty.
Posted by MadMonarchist at 10:40 PM