The Guns Fire on Fort Sumter 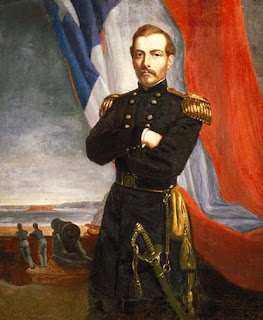 It was on this day in 1861 that Confederate forces under Brigadier General Pierre G.T. Beauregard opened fire on the Union-held Fort Sumter in the harbor of Charleston, South Carolina; firing the first official shots of the War Between the States. Commanding the Union garrison was Major Robert Anderson who had once been Beauregard's artillery instructor at West Point. General Beauregard was a south Louisiana creole and the first Catholic American to reach the rank of full general. In the end, his forces were victorious and Fort Sumter was shelled into submission though without loss of life on either side. General Beauregard was gallant in victory, allowing his enemies to fire a last salute to their flag and evacuate the fort with honor. It was a chivalric start to what would be the costliest war in American history, the bloodiest war ever fought in the Western Hemisphere. Some 620,000 Americans lost their lives in the conflict which saw the destruction of southern independence, de-centralized government, slavery and the old aristocracy of the south. The northern Union viewed the war as a continuation of the American Revolution; a war against Old World institutions and a landed gentry. The north was crowded cities, factories, banks and new immigrants. It was secular and transcendentalist. The south was old families, vast plantations, well mannered gentlemen and colorful southern belles. It was religious, historical, traditional and a society where everyone knew one's place.
The War Between the States also had an impact beyond the shores of America. It aroused a great deal of republican nationalism in the United States, so much so in fact that Canadian leaders chose to name their country the "Dominion of Canada" rather than the "Kingdom of Canada" for fear of upsetting their southern neighbor. The Union victory and Confederate defeat also spelled the doom of the monarchy in Mexico and the French effort to create a Latin American Catholic empire. Relations between the USA and Britain and France were laid low and not fully repaired until the First World War. The war would devestate the south, lead to the loss of all political and civil rights for White southerners and lead to occupation by northern troops -the only time entire American states have been under martial law. However, all of that was still in the future on April 12, 1861. On that day southern hopes were still high for victory and the battle had just begun which would make the first battle of the war a Confederate success.
Deo Vindice
Posted by MadMonarchist at 12:18 AM