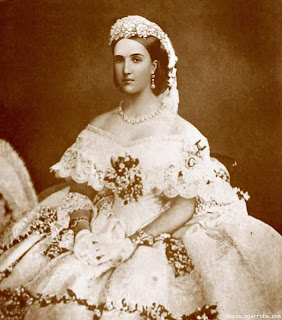 She was born Princess Charlotte of Belgium but became famous the world over as Carlota, Empress of Mexico. From her earliest childhood she displayed the characteristics she would be known for throughout most of her life. She was extremely hardworking, despised idleness, very driven, very intelligent, very courageous and very independent while also being very devoted to those she loved. On July 27, 1857 she married Archduke Maximilian von Hapsburg, younger brother of Emperor Francis Joseph of Austria. For a time they were the viceregal couple of the Austrian territory in Italy but found their hands tied there and unable to have much of an impact. When the French Empire and leading Mexican Catholics offered Maximilian the Crown of Mexico she urged her husband to accept. They were both young and idealistic and convinced they could make Mexico great and usher in a new era of monarchial glory in the New World.
Going by the Spanish version of her name, Empress Carlota quickly showed her hardworking nature and zeal to be a good empress. She held parties to raise money for the poor of Mexico, hand sewed nightshirts for people in the hospital and had orphanages and poor houses built. She also proved a more able administrator than her husband and often acted quite capably as regent while he was touring the country. She was also extremely brave and afraid of nothing. When republican revolutionaries became a problem she assured her husband that there was no situation she could not handle. She told him that if a threat arose, as long as she had a few hundred zouaves on hand she could deal with it herself. Although she was a proud relative of the old French Royal Family she, like many others, became infuriated by French actions and when it was announced they would remove their troops from Mexico, in violation of the Treaty of Miramar, she went to Europe to confront Napoleon III herself.
Sadly she did not see Mexico or her beloved husband again. She soon fell into a worsening state of insanity and as her husband marched to his death at Queretaro she had a complete breakdown in Rome while visiting Pope Pius IX. She spent the rest of her long life in seclusion in Belgium. She lived through the First World War and German troops were posted to guard her estate warning potential troublemakers that it was the property of the Empress of Mexico, the sister-in-law of their ally the Austrian Kaiser. She died in January of 1927 and her coffin was escorted by the few elderly survivors of the Belgian Legion, the Empress Carlota Guards, who had fought for her in Mexico.
Posted by MadMonarchist at 9:17 PM