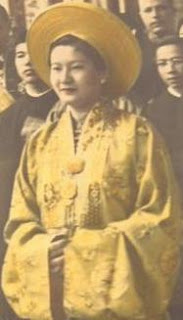 The last Vietnamese empress was born on December 4, 1914 in Saigon, the heart of what was then the French colony of Cochinchina. Her father was the Duke of Long My, a successful merchant and an old south Vietnamese Catholic family. She was educated in France and upon returning home became equally known for her beauty and intelligence. It was this that mostly impressed the last Vietnamese Emperor, Bao Dai, who could not find a woman among the Viet and Siamese noble women who could match his own education. The marriage discussions caused some problems due to her religion. Since any heirs would be expected to carry out the traditional duties of the Emperor in the native Confucian religion the Church would not grant a dispensation. Envoys were sent to the Vatican but even warnings of a repeat of the situation with Henry VIII of England would not make the Church budge and so the couple had to settle for a civil ceremony. That was done on March 20, 1934 and a short time later Nam Phuong was raised to the status of Empress which was quite unprecedented for a Vietnamese consort. In the years that followed Empress Nam Phuong gave her husband 5 children; 2 sons and 3 daughters.

Because of her religion Empress Nam Phuong was not immediately popular with the majority Buddhist population but soon won the love and admiration of the people. She worked as patroness of the Vietnamese Red Cross and was head of the Reconstruction Committee for Vietnam during World War II. Following the abdication of her husband in 1945 she moved to her family's home in France where she had her children converted to Catholicism. She would undoubtedly have been of even greater service to her country but her life was cut short by her sudden death on September 15, 1963.
Posted by MadMonarchist at 10:05 PM