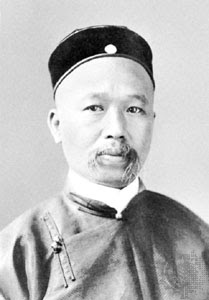 Born in 1858 Kang Youwei was one of the most prominent and committed monarchists of the late Qing dynasty period in China. A noted caligrapher, student of political theory and mandarin he held the opinion that the Great Qing Empire would have to change and adapt or die. Kang Youwei, like many others across East Asia in his time, was greatly impressed by the Empire of Japan following the Meiji Restoration. Their rapid modernization and rise to power while still maintaining their traditional culture and monarchy inspired many and Kang Youwei believed that the imperial system in China could only be saved by acting along similar lines.
Kang Youwei won the support of the young Emperor GuangXu who also favored a sort of authoritarian constitutional monarchy that would allow the country to modernize while maintaining the key elements of imperial rule. The Emperor appointed Kang Youwei to be one of his chief advisors and he was the driving force behind the "100 Days of Reform" which was a period of frenzied imperial activity designed to modernize the country, establish a constitutional monarchy with popular representation while still stressing dynastic loyalty. However, while Emperor GuangXu favored Kang Youwei the Grand Empress Dowager Cixi, long the most powerful figure in the Chinese Empire, despised him and opposed any effort to change the traditional imperial system. In a palace coup the Empress Dowager effectively removed Emperor GuangXu from power and Kang Youwei was forced to flee to Japan or face execution.
In exile Kang Youwei remained loyal to Emperor GuangXu and formed the "Protect the Emperor Society" in Japan and preached his message throughout the overseas Chinese communities. He was adamantly opposed to the republican revolution of 1911 led by Sun Yat-Sen and when he returned to China following the abdication of the Qing dynasty he worked tirelessly for the restoration of the last Qing Emperor Xuantong, aka Henry PuYi. He was a leading figure in the 1917 coup of Marshal Zhang Xun which restored the last Emperor for a few days. However, the leaders fought over leadership and republican leaders failed to deliver promised support and turned against the Qing loyalists. Kang Youwei was disillusioned by the behavior of the Marshal of the "pigtail army" and as the republican forces crushed the loyalists he fled to the American legation.
Kang Youwei was a devout Buddhist and sincere believer in the Confucian moral code and so-called "neo-Confucianism" played a major part in his political philosophy of constitutional monarchy. He died of poisoning in 1927 in the old German port city of Qingdao, then under Japanese control still loyal to his deposed Emperor to the very end. Wansui Kang Youwei!
Posted by MadMonarchist at 10:10 PM