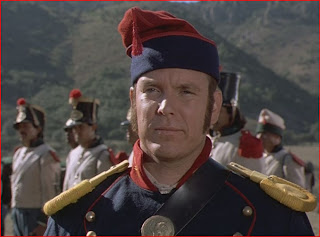 In 1998 then HSH Hereditary Prince Albert of Monaco appeared in a cameo in the film "One Man's Hero" about the career of the San Patricio Battalion; a group of predominately Irish deserters from the US Army who fought for Mexico in the Mexican-American War. Largely considered traitors in the United States the San Patricios are still celebrated heroes in Mexico. They left the US Army largely because of religious persecution and became an artillery battalion in the Mexican army and quickly earned a reputation of an elite unit. Prince Albert played the part of Private James Kelly, probably a reference to the Irish heritage of his late beloved mother Grace Kelly, who had seen previous service in Her Majesty's Royal Artillery. When he informs his commander of this (John Reily played by Tom Berenger) he is complimented on his valuable experience but reminded, in what I am sure was the film crew having a bit of fun with the Monegasque prince, that there are no royals around anymore and that they serve a republic. Listed in the credits as "Albert Grimaldi" the Prince has a double connection with a film like this. Aside from his Irish ancestry through his mother, he also has some Mexican blood in his veins via his grandfather Prince Pierre of Monaco, Duke of Valentinois, whose mother was the Mexican lady Susana Maria de la Torre y Mier.

Posted by MadMonarchist at 1:37 AM