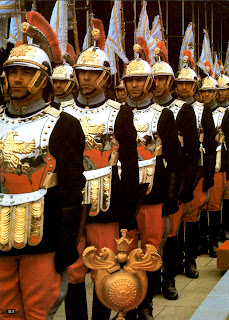 The Iranian Imperial Guard was formed in 1942 as an outgrowth of the former Persian Royal Guard. It started with 700 special volunteers organized by General Jafar Shafaghat but quickly expanded in size to the Imperial Guard Division in 1953. It was built around the Javidan Guard who were known as "The Immortals" in reference to the famous Imperial Guard of ancient Persia from which they historically descended. It has always been somewhat unique in Imperial Iran that, although they have long been a staunchly Shia Islamic country on the whole, they still took great pride in their history and the glories of the ancient Persian Empire. The Immortals were housed at the Lavizan Barracks in the north side of Tehran and by 1978 this most elite formation had grown to brigade-size and included its own tank arm as well as a troop of household cavalry (Pahlavi Cavalry Guard) for ceremonial duties at the court of the Shah. Despite this growth however, standards for membership were kept extremely high. To qualify to become an Immortal a recruit had to pass an astounding array of mental and physical tests as well as be able to recite his own family history backwards to 23 generations from memory.

The Immortals were a stylish symbol of what would prove to be the last bow of Persian royal glory before the outbreak of the Islamic Revolution. In that most crucial period the Iranian Imperial Guard proved staunchly loyal to the Shah. There were some clashes with militant revolutionaries but everything happened too quickly for a major battle to ensue. The Shah left the country on the promise that he could return after the situation had been calmed, but of course that never happened. The Ayatollah took power, abolished the monarchy and declared the country a theocracy as the Islamic Republic of Iran. The Iranian Imperial Guard was returned to its barracks and disbanded, some later being absorbed into regular military units to participate in the Iraq-Iran War.

Posted by MadMonarchist at 3:10 PM