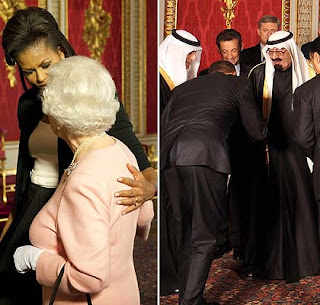 In his first overseas trip as President and First Lady the Obamas have made some tongues wag over their interaction with royalty. Could it be the simple mistakes of the New World versus the Old World? Possibly, but taken altogether many people are wondering if there is not more to it than this. The two incidents which made the most headlines were Michelle Obama putting her arm around Queen Elizabeth II, thus violating the taboo of not touching royalty, and Barack Hussein Obama bowing very low to King Abdullah of Saudi Arabia. Liberals of the "Obama can do no wrong" crowd are inclined to dismiss both the over-familiarity with the British Queen and the over-reverence to the Saudi King -as inconsistent as that is. Others, in the more critical camp, tend to be outraged for a number of reasons.
The Obamas have behaved oddly if not badly toward the British from day one. First there was the snubbing of Prime Minister Gordon Brown on his visit to the US, accompanied by a White House aid saying there was nothing "special" about our relationship with Britain and efforts to brush it off by saying that Obama (one of the youngest presidents in US history) was simply "tired". They also note that while Obama barely gave Queen Elizabeth II a nod he bowed nearly to the hip to King Abdullah of Saudi Arabia. Family history has also caused some to question whether or not the two extremes were intentional. Obama's grandfather was put in prison for a couple years in Kenya for revolutionary activity against the British Crown and the family claims the British authorities tortured him. On the other hand Barack Hussein Obama Sr. was a Muslim, Obama Jr's step-father in Indonesia was a Muslim and he himself was listed as a Muslim on his school records in that country. Obama has since stated he is a Christian though since being elected president he has yet to attend any services.
There is also quite a vast gulf of difference between the Saudi and British monarchies. Whereas Great Britain is a constitutional monarchy with elected leaders, freedom of speech, assembly, religion and all the rest of it, Saudi Arabia is an absolute monarchy with none such freedoms where Bibles are shredded at the border and women are not even allowed out in public without a male escort. This has left many Americans wondering why, if Obama is going to bow to a monarch, would he bow to the King of Saudi Arabia instead of Queen Elizabeth? This is what puzzles me about the President's behavior. I really have no problem with Obama bowing to the King of Saudi Arabia; he is royalty and one would try to show all due respect for the customs and traditions of the people one is dealing with. However, why is the British monarch treated with such familiarity and the Saudi monarch with such obeisance?
The White House has denied that Obama bowed to the Saudi king but frankly that only seems to have made the situation worse because the video and the pictures speak for themselves. He did it. When taken in context with his other words and writings over the years and his family history it does seem that the Obamas have a certain disdain for Great Britain whom, Michelle Obama in particular it has been said, still associate the British with the British Empire and, let me just say she does not seem to view the British Empire as the glorious past organization that I do. Given Obama's politics and family history I would not expect his view to be very different.
Posted by MadMonarchist at 1:23 AM