The Battle of Camaron 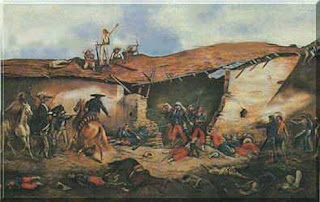 It was on this day, April 30, in 1863 that the most famous battle in the history of the French Foreign Legion was fought at the Hacienda Camaron in the Mexican state of Veracruz. The French Imperial Army under General Elie Forey was laying siege to the premier republican city of Puebla and had to depend on a long supply line running through the mountains and rugged country of the Mexican interior to the port of Veracruz. When republican spies reported that a large payroll in gold was on its way to the French army at Puebla the Mexican republicans immediately dispatched troops to intercept it. With few available forces on hand the French had only the Foreign Legion to delay the Mexican column long enough for the payroll to reach safety. That duty fell on the Legionnaires of Captain Jean Danjou who had only 65 men to confront 2,000 Mexican republicans. After repelling several Mexican cavalry charges in the square formation the French barricaded themselves inside the Hacienda Camaron and stood their ground.

The Mexicans demanded that the French surrender, pointing out the impossible odds against them but Captain Danjou refused and the republicans charged the hacienda in wave after wave as the troops of the Foreign Legion cut them down. The fighting was hot and intense and by mid-day Captain Danjou was killed; shot through the chest, but his men stood firm and fought on, throwing back charge after charge by the republican horde. Toward the end of day 60 officers and men of the Legion were dead or wounded; only 5 remained and they had all but depleted their ammunition. Naturally, they decided to fix their bayonets and charge. Two were shot down as they dashed out and another fell as the republicans overwhelmed them. Only 2 lived to be captured and they demanded honorable terms for their surrender which the Mexican commander granted being so overcome by their courage and determination. Despite their tactical defeat they had accomplished their mission and had taken a hundred of the enemy with them. From that day on no one looked on the men of the Foreign Legion without awe-inspired respect in their eyes and the day of the battle of Camaron became the official holiday of the French Foreign Legion and the wooden hand of Captain Danjou their own sort of holy relic.

In the period following the battle the city of Puebla fell to General Forey, Mexico City was occupied and the monarchy was restored in the Second Mexican Empire to be led by Emperor Maximilian and Empress Carlota. In France Emperor Napoleon III ordered the name of Camaron to be emblazoned on the standard of the Legion and so a legend was born and a reputation earned in the wilds of Mexico 146 years ago today.
Posted by MadMonarchist at 1:04 AM