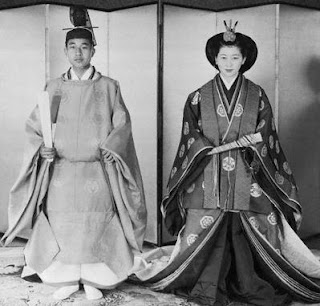 Today marks the Golden wedding anniversary of Their Imperial Majesties Emperor Akihito and Empress Michiko of Japan. Akihito, son of the last divine Emperor of Japan Hirohito or Showa married Michiko Shoda on April 10, 1959. It was the first time in the ancient history of the Yamato dynasty, the oldest in the world, that a member of the Imperial Family had married a commoner. The two have had, by all accounts, a very happy marriage in all the years since and have had three children; 2 sons and 1 daughter. Despite the advance of the age of the invasive media the Japanese Imperial Family has managed to maintain a degree of mystique, respectability and are generally very popular for their upright devotion to duty and care and concern for Japan. They are to be saluted for that and I hope they enjoy 5o more years of wedded bliss.

I will only take the occasion to add, without going into the Crown Princess Masako dynamic, the closest thing the media could come to a "scandal"; that I must count myself as one of those who would tend to oppose any effort to interfere with the operations of the Imperial Household Agency which is often accused of smothering members of the Imperial Family, keeping them in gilded confinement and so on. I would oppose it, not because I totally agree with everything the IHA does but because I have too much suspicion for words like "reform" or "modernize" and the like. I also find myself doubting the sincerity of those who claim to love their royals so much that they want to "save" them from the monarchy. They want to abolish monarchies because they want to set the royals free. I tend to doubt it. I also think that, despite the bad press the IHA has got over the years, they have done a good job of maintaining imperial traditions and perhaps most importantly maintaining the imperial mystery and majesty of the Emperor and his family. Some might prefer cordial familiarity to distant, regal mystery and in some cases it works as well or better. However, I see no reason why the Japanese should change the way they do things. If the Crown Princess has had a hard time adjusting I would say it only proves why traditionally it was considered necessary for royals to marry fellow royals who already knew the job and what the life of royalty would entail.

But enough of that, I congratulate the Emperor and Empress on their 50 years of marriage and wish them many more. Long live the Emperor!
Posted by MadMonarchist at 12:07 AM