Last Bow of the Jacobites 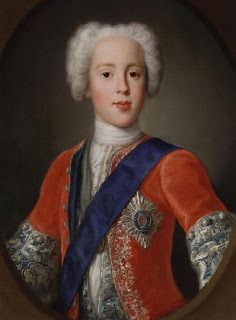 Today marks the anniversary of the last battle fought on British soil; the battle of Culloden moor in the north of Scotland in 1746. It was the last battle in the fight to restore the Stuarts to the British throne and is generally remembered as the last charge of the highland clans. It is often forgotten that the 45 Uprising was a fight for the whole of the British Isles and the Jacobite army included men from England, Scotland and Ireland while the Hanoverian army included many foreign mercenaries from Europe. However, the battle does hold a special significance for Scotland, especially given the atrocities that happened afterward and the suppression of Scottish culture that followed. It was the end of the old, traditional system of organization and loyalties of the highland clans. It many ways it was the end of an era, the last of the old and the first of the new when it came to both tactics and politics. Men fought for the Stuarts for personal reasons, men fought for the Hanoverians for political reasons. It was a victory for modernity, for the current form of the parliamentary monarchy and in a way a victory of reason over romance. It was also the end of the Jacobites as a viable group of opposition. When revolution came to North America many former Jacobites fought for King George III against the republican revolutionaries.
I would hope that enough good grace is left in Great Britain to show tolerance and kindness to the vanquished in that last British civil war. With the battle of Culloden the Jacobites were finished and everyone, deep down, knew it. Henry Cardinal York seemingly endorsed the house of Hanover in the person of King George III and so, given all of that, I would ask the modern-day Hanoverians not to be too hard on the modern-day Jacobites and let them keep their vision and their ideals as it is all they have left. Every Jacobite I have ever met supports the British monarchy, they know that the Duke of Bavaria is never going to press his claim and they would rather have any monarchy rather than the nightmarish lie that a British republic would be. They simply want their history and traditions treated with the dignity they deserve for it was very noble ideals and principles that those men who charged across the moor at Culloden were fighting for; legitimate royal authority, loyalty to their rightful king, their ancient traditions and rights and de-centralized over centralized government.
Who can say what would have happened if they had won? I would like to think that the monarchy would be stronger, the succession out of political hands, parliament would understand that they answer to the Crown and the Crown does not answer to them and maybe the Sovereign would veto something once and a while (like the EU agreements that threaten UK independence). Maybe things would have not reached the point of no return with Ireland but of course no one can know that for sure. Just in case it is though, and just out of respect for what those wild highlanders at Culloden were fighting for their memory should be honored.
Posted by MadMonarchist at 12:15 AM