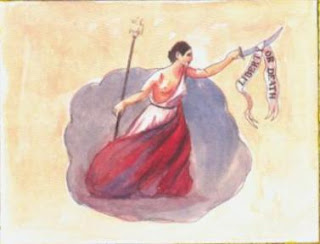 It was on this day in 1836 that the Republic of Texas won her independence from the dictator (and traitor to his Emperor) Generalissimo Antonio Lopez de Santa Anna of Mexico. The battle of San Jacinto, despite its short duration, remains one of the most crucial and pivotal events in American history. Here is the background: After suffering many injustices, not the least of which was Santa Anna tearing up the Constitution of 1824, the people of Texas rose in rebellion against the central government in Mexico City. Throughout 1835 the Texans captured every major post in the state including the old Spanish royal capital San Antonio de Bexar in the largest battle of the war. They expelled the Mexican garrison and allowed them to go home on the promise that they never fight again against the people of Texas.

Starting in 1836 General Santa Anna mobilized his Army of Operations for a massive two-pronged counter-offensive to take Texas back and to drive out or exterminate the Anglo population. The Mexican army was everywhere victorious. On March 2, 1836 the Republic of Texas declared its independence from Mexico ending the long dispute between those who favored independence and those who favored the restoration of their rights under the Mexican Constitution of 1824. On March 6 Santa Anna's troops stormed the Alamo at San Antonio whose tiny garrison fought to the death. The 5 or 6 survivors were hacked to death by Santa Anna's officers. The following Palm Sunday, after the surrender of Texan forces under Colonel James Fannin, Santa Anna had the entire garrison, roughly 400 men, marched out and massacred. A massive flight of the Anglo settlers followed as the Mexicans marched north in what became known to history as "the Runaway Scrape".

General Sam Houston, commander of the Texas Army, retreated again and again without giving battle. When his officers were on the verge of mutiny he finally turned and attacked after Santa Anna had foolishly divided his forces and camped in a vulnerable area. It was April 21, 1836 and General Houston himself led the charge against the Mexican camp which was so overconfident that they had not posted a single picket. The battle lasted only about 20 minutes though the killing went on for much longer. Santa Anna abandoned his troops and fled but was captured later. The Mexican army was utterly defeated and Santa Anna recognized Texas independence in return for his life and ordered his remaining troops to return to Mexico. The era of Mexican rule was over and the era of the Republic of Texas had begun. 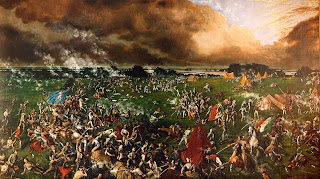 Posted by MadMonarchist at 10:38 AM