The Mutiny on the Bounty 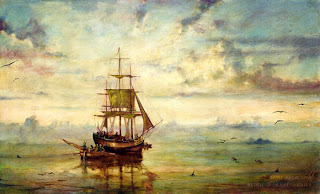 On this day, April 28, in 1789 First Mate Fletcher Christian led a group of disgruntled sailors in the most famous mutiny in naval history on board the British ship Bounty during their return trip from Tahiti. They were bound for Jamaica to deliver breadfruit plants to the plantations there but never made it. Contrary to Hollywood myth the ship's captain, Lieutenant William Bligh, was not a sadistic taskmaster but rather it was a combination of the lure of island life and the proud, fragile ego of Christian that caused the mutiny. Also contrary to popular opinion, most of the sailors were loyal to Bligh and not mutineers at all. I have always been a fan of the story, and the genre in general, but the true tale of Bligh and Christian and the Bounty mutiny has always most stood out to me for the lessons that it offers and it holds true for monarchists as well.

Captain Bligh was the king and the ship was his country while the mutineers played the part of Jacobin revolutionaries overthrowing lawful authority. The lesson comes in observing how differently both sides fared after the mutiny. Bligh and his loyal sailors were cast adrift slap in the middle of the south Pacific with no maps, 3,600 miles from the nearest port with only enough food and water for one week in their overloaded row-boat. It seemed to everyone they were certainly doomed. On the other hand the mutineers had a fully loaded ship, charts, navigational tools and the means to go anywhere and start over however they liked. Yet, Bligh and his tiny boat had discipline whereas the mutineers did not. It was Bligh who navigated from memory to bring his tiny craft 3,600 miles to Coupang on Timor Island, Indonesia without losing a single man to the sea of privation. He lived to return to England and went on to a distinguished career as a Vice Admiral in the Royal Navy and the Governor of New South Wales, Australia.

What was the fate of the mutineers? Well, after picking up women and slaves in Tahiti they settled on Pitcairn Island where before long they began fighting amongst themselves and eventually killed each other until only one man remained alive with the women and children who was later found by an American whaler. The lesson is that once true, legitimate, lawful authority is gone that unity and discipline can never be regained and in the long run can only lead to destruction.
Posted by MadMonarchist at 12:14 AM