He was born His Serene Highness 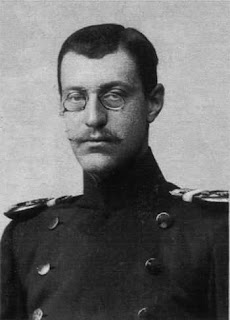 Wilhelm Karl Florestan von Urach, Graf von Wurttemberg in 1864 as succeeded as Graf von Urach at the age of 4. His mother was Princess Florestine of Monaco, sometime regent of that country in the absence of the Sailor-Prince Albert I and Wilhelm spent most of his childhood in Monaco and became rather more French in his habits than German. Because of his mother he was, for a time, heir to the Monegasque throne but the idea of having a German ruler on their doorstep was unacceptable to the French who instead recognized the daughter of the future Prince Louis II and his wife Charlotte. Eventually he abdicated his rights in Monaco in favor of some French cousins. In 1913 he was a contender for the throne of Albania being supported by the Catholic population in the north but, as we know, he lost out to Prince Wilhelm Wied who was chosen in 1914.

Like all good German princes he joined the army and served capably as general of the 26th Infantry division in World War I, taking part in the invasions of France and Belgium where his sister-in-law, Elizabeth of Bavaria, was Queen. He retired in 1917 and following the string of victories on the eastern front against Russia came to be considered for the throne of recently liberated Lithuania. He was considered well prepared for a throne, shared the Catholic religion of the country and had a good war record behind him. He was also a recent widower and might marry a prominent Lithuanian lady. The Baltic states long had a strong German aristocratic presence and so in the summer of 1918 he was formally invited by the Crown Council of Lithuania to become king. He accepted the invitation and was duly elected the following month, against the wishes of the socialists who boycotted the proceedings, as King Mindaugas II.

This meant he got farther than most other potential monarchs of the Great War but he still never had a chance to establish himself. It should also not be taken for granted that this was simply to be a German puppet state. The Lithuanians were sincerely wanting independence and they knew that the only way they could survive Russian re-conquest was by keeping close to Germany and they also insisted that their King reside in Lithuania and speak Lithuanian. If the Germans had simply been calling the shots as they wished the country would have been absorbed into the German Reich and, in fact, Germany never recognized Wilhelm (or Mindaugas II as he was) as King of Lithuania. In light of this opposition he was forced to remain in Liechtenstein while the political kinks were worked out though he did get the spiritual comfort of a letter of congratulations from Pope Benedict XV on becoming King of Lithuania.

Of course, by the autumn the whole dream fell apart with the defeat of Germany on the western front, the armistice and the recently liberated countries in the east abandoning the Germans and rushing to the Allies for support. It would not ultimately do them any good as all of the Baltic states were re-conquered by the Soviets just prior to World War II and would remain subject to the USSR until the collapse of the Iron Curtain. As for Duke Wilhelm he married the daughter of King Ludwig III of Bavaria but had no children and was passed over for the throne of the former Kingdom of Wurttemberg. He died in 1928 in Italy.
Posted by MadMonarchist at 12:15 AM