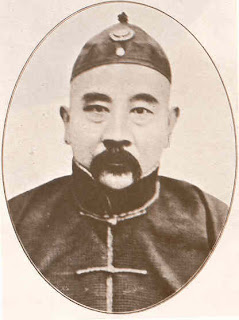 Chang Hsun (also spelled Zhang Xun) was a loyal monarchist general of the late Qing and early republican periods of China. Born in 1854 he had a normal youth for one of his station and at a fairly early age took his exams to enter the military mandarinate. During the Boxer Rebellion he commanded the military escort of the Grand Empress Dowager Cixi as she was forced to flee for her safety after having endorsed the Boxers in an effort to drive the foreigners out of China. During the republican revolution of 1911 he fought for the Qing dynasty at Nanjing and took the city from the Kuomintang republicans in 1913. For this victory he was promoted to Field Marshal by Yuan Shihkai who became the first President of the Chinese Republic (he had posed as a Qing loyalist and negotiated the Articles of Favorable Treatment). He later broke with his former commander during the warlord period as Chang would not desist in his loyalty to the boy Emperor PuYi and the Qing dynasty.

Because his troops would not accept the republic and continued to wear the traditional Manchu queue as a sign of their loyalty to the Great Qing Empire they were often called the "Pigtail Army". When it became clear that the republican government could not maintain control over the feuding warlords of China many in the government seemed open to the idea of a restoration of the monarchy. The German Empire, with World War I raging, was also desperate to keep China neutral and the German legation provided Chang with money and weapons to support his restoration efforts. Chang also made a temporary alliance with the veteran monarchist Kang Youwei. After securing the support of key republican officials Chang Hsun and his Pigtail Army marched on Peking and occupied the city in 1917 at which point PuYi was restored to the throne once again as Xuantong (or Hsuan-tung). Qing robes were worn again and there was a rush on costume shops to provide horse-hair queues so that one could appear to have been 'always faithful'. However, things began to come apart almost immediately. Kang Youwei dropped out after becoming convinced that Chang Hsun was most determined to be the power-behind-the-throne and the promised endorsement of the republic did not materialize. Republican troops from the south marched on Peking and after only a few days and some scattered clashes the Pigtail Army was dispersed and Chang Hsun was forced to flee to the Dutch legation. He stayed out of politics from then on and died in 1923.

Posted by MadMonarchist at 1:04 AM