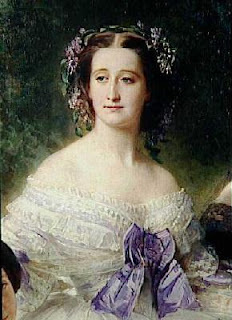 Eugenie, the last Empress of the French, is a fascinating woman and, in many ways, a more admirable figure than her husband. She was certainly more principled and more consistent than Emperor Louis Napoleon III, she was a woman who knew who she was, what she believed and had the courage of her convictions. A native of Granada, Napoleon III was smitten by the Spanish beauty at first sight but to his dismay the highly virtuous Eugenie forced him to embark on and old-fashion campaign of courting and finally marriage on January 30, 1853. Some in France sniffed arrogantly that the woman from minor Spanish nobility was not worthy of a Bonaparte emperor but others, particularly in Britain, were not impressed by such snobbery considering that the Bonapartes themselves were only two generations removed from poor Corsican trash. To her credit, Empress Eugenie proved to be a far more zealous, determined and faithful wife and consort than her husband was husband and monarch.
Empress Eugenie had many qualities to recommend her. She was a passionate monarchist, a devoutly religious Catholic and she was afraid of nothing. It was she who pressed her husband to rush to the defense of the Church in every corner of the globe from Mexico to Vietnam. She was also an ultramontane; an adamant defender of the temporal and spiritual authority of the Pope who was finally kept on the Petrine throne by French Imperial troops. She also had a deep fascination for the tragic Queen Marie Antoinette and by her fashionable trend-setting brought about a Louis XVI chic revival but she was also a very intelligent woman who ruled the French Empire as regent during the absences of her husband. As much as the xenophobic sections of society might criticize her for being a foreign Spaniard she was actually a very adamantly French Empress as long as she was on the throne and when Bismarck of Prussia began provoking France she was at the forefront of those calling for war to break the proud Prussians and restore la gloire of France that had suffered a bit by the inglorious pull-out from Mexico.
Of course the 1870 war against the Germans did not go well, the Second Empire fell and Empress Eugenie went into exile in England with her family, staying out of French affairs ever after. She was deeply crushed by the death of her son, the Prince Imperiale Napoleon IV, in South Africa and she died at the age of 94 while visiting her native Spain in 1920.
Posted by MadMonarchist at 1:30 AM