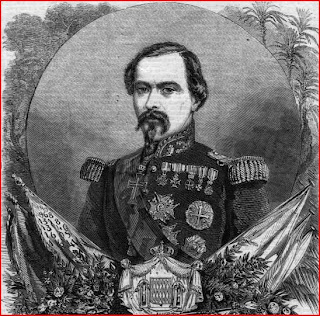 His Serene Highness Prince Charles III is, in many ways, responsible for making the Monaco we all know today. Born in 1818 in Paris he married Antoinette de Merode-Westerloo in Brussels, Belgium in 1846 and ten years later succeeded his father as Sovereign Prince of Monaco. The principality had been shaken by political upheaval in the revolutions of 1848 and Prince Florestan I, an actor, was quite out of his depth and eager to abdicate in favor of his son Charles. The cities of Roquebrune and Menton were lost and annexed to France which gained the protectorate over Monaco from the Savoys. Monaco thus lost 80% of its territory but was paid compensation by France. Charles III was responsible for the adoption of the official Monegasque national flag and in 1863, to solve his economic problems, legalized gambling which was banned elsewhere. This led, in 1866, to the establishment of the now world famous Monte Carlo casino. It was not much to begin with, but it was a start and put the principality on the road to financial recovery. It also brought about a confrontation with the Jesuits who demanded monetary compensation from the Prince for their property near the new casino. Threatening to take a cash-strapped absolute monarch to court over money was probably not the wisest thing to do and Charles III had the order expelled from Monaco. The Prince also tried to raise the profile of Monaco on the international stage and opened diplomatic relations with many other countries and signed a Treaty of Friendship in 1864 with the Bey of Tunis to regulate maritime law and trade between the two countries. To further promote tourism and the economy Charles III supported the building of the railroad connecting Monaco with Nice in 1868 and the following year suppressed almost all taxes in the principality which greatly encouraged investment. In 1879 a theatre was added modeled after the Paris opera. Charles III died in 1889 at the Chateau de Marchais in France and was succeeded by his son, the sailor prince, Albert I. After inheriting a country beset by crisis there is no doubt that Charles III left Monaco stronger than he found it.
Posted by MadMonarchist at 12:16 AM