The Easter Uprising: A Monarchist Faction? 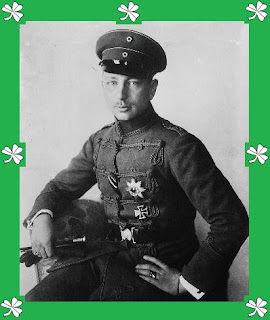 It was on this day in 1916 that the famous Easter Uprising broke out in Dublin. It is most remembered for its declaration of the Irish Republic and for what the very Catholic ringleader, Padraig Pearse, called a passion of the Irish people, a sacrifice that was needed to rally the people for the final push to independence. Everyone is aware of the involvement of the Irish Republican Brotherhood, the Irish Volunteers, the Irish Citizen Army and the strong presence of the socialists. Fewer are aware of the monarchist faction or at least the raising of a monarchial possibility by the Irish rebels. It would be easy to make too much of it as there really was not that much to it; these men were practically all republican idealists after all. However, they also knew that the success or failure of their bid for independence would, in the long run, depend greatly on German victory in the Great War that was then raging.
Other peoples who aspired to independence during the war years knew that a good way to gain entrance into the good graces of the Germans was to put a German prince on their national throne and this was at least floated as an idea by the Irish leaders in the Post Office. The choice spoken of as a potential Irish monarch was no less than the Kaiser's son Prince Joachim of Prussia. One would expect that this would entail a change of religion on his part as it would hardly seem to make sense to replace one "German" Protestant (George V) with another German Protestant when Ireland was overwhelmingly Catholic. Of course, as we all know, nothing came of the idea as the uprising was swiftly and brutally crushed by the British army and the ringleaders all taken out and shot (with the exception of Eamon de Valera). It is important to note that King George V advised against this and it is a shame that his ministers did not listen to him for the King could see beyond the bigotry to the truth that this would only hurt the British cause in the long run. By executing the men the British government turned failed rebels who were initially greeted with scorn and derision into martyred heroes of independence.
The British also blamed Sinn Fein for the uprising (which they had little to nothing to do with) and British blame meant Irish credit and so Sinn Fein rose to power on a wave of popular support in Ireland and quickly abandoned their monarchist roots (they had originally favored a dual-monarchy with Britain) and became an increasingly radical republican party. They are still radical in their politics today but not quite so radically republican since going along with the power-sharing agreement in the 6 counties under the British Crown. As one Irishman noted they have basically come off looking like the SDLP for slow learners. However, it all started on this day, with the proclamation of a republic, with rumors of a monarchy under Prince Joachim, and the fuse had been lit for the wars, Free State and independent republic that followed.
Posted by MadMonarchist at 6:27 PM