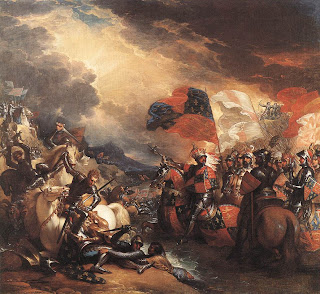 One of the greatest English monarchs of the Middle Ages was certainly King Edward III, a Plantagenet, one of the most legendary warrior kings of England who made the English nation the premier military power of Western Europe in his time. Edward was the oldest of the four children of King Edward II and his formidable French wife Queen Isabelle. He was born at Windsor Castle on November 13, 1312 at 5:40 AM -the first English monarch whose time of birth was recorded. When Queen Isabelle and Roger Mortimer deposed Edward II (who was later murdered) the heir to the throne, titled as Earl of Chester, was proclaimed Keeper of the Realm and the following year was formally crowned King Edward III on February 2, 1327 in Westminster Abbey.

The following year, after receiving a dispensation from the Pope in Avignon, Edward III married Philippa of Hainault on January 24, 1328. She was a warm, kind woman and her gentle touch provided a good counterbalance to her gallant but rough husband. Their marriage lasted 25 years and produced 12 children. Rather than family affairs, it was the start of the Hundred Years War that was to be the most dominant feature in the long reign of Edward III. Pressing the notion that his mother was the heir of King Charles IV of France, who died in 1328, Flemish businessmen with commercial ties to England prevailed upon Edward III to claim the title of King of France in 1340. The French responded by attacking English lands in Guienne.

King Edward III, in grand Medieval style, donned his battle armor, mounted his war horse and led the English knights in a string of victories. First there was the naval battle of Sluys in 1340 that won English control of the Channel and quick access to the battlefields in France. In 1346 King Edward III defeated a much larger French army at the battle of Crecy, suffering relatively few losses compared to the immense casualties suffered by France, which he followed up by besieging the port city of Calais which fell after 11 months in 1347. In 1356 Edward won another great victory in France at the battle of Poitiers. Once again, Edward III was vastly outnumbered but inflicted a stunning defeat on the French, losing few troops compared to thousands lost by France, including their monarch King Jean II who was taken prisoner.

Edward III had been forced to adopt some rather unpopular policies to support his war in France but grumbles were hushed by the seemingly miraculous victories he won on the battlefield. However, England was soon struck by an enemy even the famous warrior king could not combat; the Black Death. Estimates range as high as half the population of England died of the plague and this forced England and France into signing a peace treaty with Edward renouncing his claim to the French throne. However, by 1369 he was ready to fight again, reasserted his claim to be King of France and charged into battle, retaking Poitou. However, Edward’s son, the famous “Black Prince” died of dysentery and a French naval victory greatly reduced the fighting capacity of the English. The fighting faded out and the French were able to regain some of their losses but at the end of the day England still held Bordeaux, Bayonne, Brest, Calais, Cherbourg and the lands around them.

At home King Edward III was probably less successful than he was on the battlefield but still made some historic achievements. French was replaced by English as the language of the court, the office of Justice of the Peace was created, Parliament was divided into two houses and in 1348 King Edward III founded the Most Noble Order of the Garter; the highest chivalric order in Great Britain still today and one of the most prestigious knighthoods in the world. Queen Philippa died in 1369, a much loved peace maker and gentle woman. To replace her King Edward III took a mistress named Alice Perrers who made him fairly miserable for his final years before his death on June 21, 1377 after suffering a stroke.

Today, by and large, Edward III is remembered as one of the greatest English kings of the Middle Ages. He has had his detractors but none of their criticisms have long survived. In his own time he was hailed as the greatest English monarch since the time of King Arthur. He was gallant, personally courageous, a skillful general, an at least capable statesman for his time and although he has been accused of a certain lustfulness there is no evidence that he ever was unfaithful to his wife, his only known mistress being taken after her death and Edward III stands quite apart from most Medieval sovereigns in there being no evidence of his having any illegitimate children. All in all he was everything a successful monarch of his time was expected to be; a brave King who led his troops into battle, defeated his enemies and expanded his kingdom. In that, certainly few others have matched him.
Posted by MadMonarchist at 12:17 AM