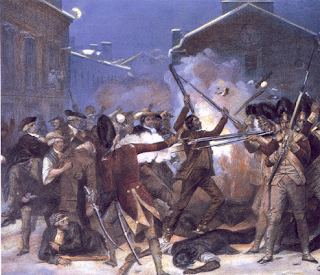 Tonight on "The O'Reilly Factor" Bill O'Reilly went pretty far overboard in his definition of "terrorism". Most of the time, I don't bother with this stuff too much because a) O'Reilly often says things simply to irritate the "right" in order to back up his claim of being "independent" and b) the pro-America hurrah! hurrah! attitude much of this stems from doesn't bother me that much. What happened cannot be changed and every country needs some kind of founding myth to rally around when the population has virtually nothing in common. However, sometimes things can be taken too far. Case in point, O'Reilly comparing the controversy over lawyers who defend Muslim terrorists to John Adams defending some of the British soldiers who participated in the so-called "Boston Massacre" which, O'Reilly said was 'surely an act of terrorism'.

Hold the phone Bill! First of all, it was no "massacre". Only 11 people were shot, only 5 of whom died and the shooting came at the height of a very ugly confrontation between a mob of some 300 to 400 Bostonians and a mere 7 or 8 British soldiers who were being pelted with snowballs, rocks, sticks and insults as well as being dared to shoot by people in the mob. All of these were regular soldiers in the British army, in uniform, standing on guard duty as they had been for some time. By no stretch of the imagination could these men be called terrorists or the shooting an act of terrorism. In fact, the subsequent trial of several of those involved found mostly in favor of the British.

Lest the British feel too picked on here, O'Reilly, later in the same broadcast, also compared the Japanese surprise attack on Pearl Harbor to an act of terrorism. A much more horrible affair no doubt about it, but again, hardly an act of terrorism. The Japanese were regular military men, flying in marked planes and attacking military targets. In fact, when the flight commander returned to Japan, HIM Emperor Hirohito, who rarely spoke at such meetings, questioned him directly to ensure that no civilian areas had been hit in the attack. In the course of the war other very horrible things were done but in all the hyper-sensitivity of the "War on Terror" we do need to keep in mind that not every tragedy, not every surprise attack and not even every war crime is an act of "terrorism".
Posted by MadMonarchist at 8:50 PM