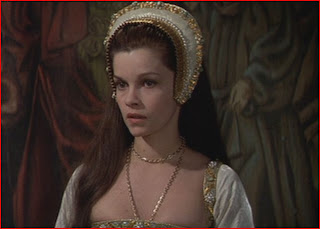 French-Canadian actress Genevieve Bujold starred as Anne Boleyn in the 1969 film "Anne of the Thousand Days". For someone coming from an admittedly partisan point of view, and as someone who views Catherine of Aragon as one of the greatest ladies in all of history, it is hard for me to find a portrayal of Anne Boleyn which I admire. Genevieve Bujold, however, strongly delivers. She certainly has the physical beauty to convince the audience she could motivate a king to tear his country in half to have her, however, in this film Anne Boleyn is portrayed as not really seeking for this to happen. Although she is portrayed as a woman with, I shall politely say romantic experience, she nonetheless wants nothing to do with the King who broke up her engagement and had left her sister abandoned after being his mistress. Rather than stringing the king along to get all the earthly glory she can, in this film Bujold portrays Anne as a woman who resists the king at every turn and hopes that she can put up so many obstacles the king will have to stop pursuing her and allow her to go her own way. Henry VIII, played by Richard Burton, tears down every obstacle though and finally wins her over, though as soon as she submits to love him he has fallen out of love with her and wants her gone whom he had once so desired. The part is played well (she won a Golden Globe for best actress and was nominated for an Oscar for the role) and gives Genevieve Bujold's Anne Boleyn a place amongst my Tudor film favorites.
Posted by MadMonarchist at 2:46 AM