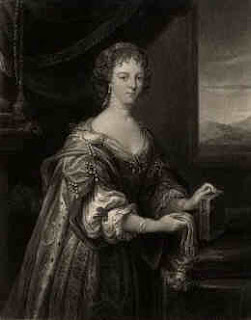 Lady Blanche Arundell was a monarchist I wish I knew more about, but from what I do know she was my kind of girl. The Lady Blanche was born in 1583, the sixth daughter of Lord Edward Somerset, 4th Earl of Worcester and Lady Elizabeth Hastings a well respected, Catholic and staunchly royalist family. On May 11, 1607 she married Lord Thomas Baron Arundell of Wardour who, went King Charles I of Britain raised the royal standard at Nottingham was quick to cast his lot with his monarch. While her husband was away at the front Lady Blanche Arundell showed her own heroism when Wardour Castle, Wiltshire, came under attack by the forces of Parliament. With only herself, her children, a handful of maid-servants and 25 men she resolved to defend the castle, her home and family against 1,300 Roundhead troops, including artillery, led by Colonel Edward Ludlow and Sir Edward Hungerford. For eight grueling days Lady Blanche defended the castle against the hopeless odds until she was finally forced to capitulate. However, thanks to her staunch defense she was able to negotiate honorable terms for her surrender which were signed on May 8, 1643. Lady Blanche was able to leave the castle with her head held high but she had no money and no place to go. Fortunately Lord Hertford provided her with accommodations at Salisbury. Her husband later returned at the head of royalist column and took back the castle his wife had so heroically defended but sadly he was later wounded in battle and died at Oxford the same year. When Lady Blanche Arundell died at Winchester on October 28, 1649 she was buried alongside her husband at Tisbury. Her brave defense of her hearth and home, her children and family honor, all in the cause of her King warrants Lady Blanche being listed among the pantheon of great English royalists of the Civil War.
Posted by MadMonarchist at 12:19 AM