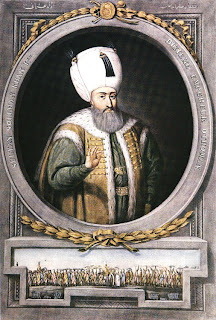 In the long history of the Ottoman Empire, one monarch who stands out from the rest is Sultan Suleiman I, better known as Suleiman the Magnificent. He is perhaps most remembered in the Muslim world for the legal code he left behind but in the Christian world he is more often remembered for his conquests and being a powerful ally to some and a mortal danger to others. Suleiman was born in Trabzon on November 6, 1494 to Sultan Selim I and from the age of seven he was groomed to one day rule, being educated in science, history, literature, Islamic theology and warfare. From the age of 17 he was given a number of important political posts, including three governorships.

Upon the death of his father in 1520 Suleiman became Grand Sultan of the Ottoman Empire, Commander of the Faithful and Successor of the Prophet of the Lord of the Universe. Described as tall, thin, pale studious and wise, great things were expected of him and he was not to disappoint. In his studies he admired the great figures of ancient history such as Alexander the Great and was determined to surpass their deeds. His competitive spirit went to such lengths that he had a 4-tiered crown made for himself in order to surpass the 3-tiered crown of the Pope in Rome. In the spirit of Alexander he immediately set out on a campaign of conquest in southern Europe, taking Belgrade from the Hungarians one year after ascending the throne.

Suleiman the Magnificent (as he soon came to be called) struck fear across Christendom with victory after victory. He invaded Hungary, the King falling in battle, conquered Hungary and after an epic siege captured the island of Rhodes. In 1526 he defeated the Hungarians again, making the Ottoman Empire the dominant power in south-eastern Europe. When the Holy Roman Emperor Charles V liberated Hungary Sultan Suleiman counter-attacked and recaptured Budapest and besieged Vienna, Austria. The survival of Christian Europe hung in the balance but at Vienna Suleiman suffered his first defeat and had to fall back. However, he won other victories later and forced Emperor Charles to sue for peace on his terms.

With the European situation settled to his satisfaction Suleiman then fought a long but ultimately successful war against the Persians, solidifying Turkish control of Iraq and the Middle East. He challenged the Portuguese in the Indian Ocean for control of the trade to the subcontinent, winning control of Yemen but failing to capture key Portuguese positions. He also later assisted rebels in Indonesia against Portugal. However, his attention was drawn back to Europe by the successes of Andrea Doria in the eastern Mediterranean and the gains of Emperor Charles V in Tunisia. Suleiman assembled a massive naval force with the intention of smashing the Christian fleets, invading Italy and perhaps more. He even promised to capture Rome and make St Peter’s Basilica into a mosque. However, despite having every advantage his fleet was defeated by the Christian forces under Don Juan of Austria at the battle of Lepanto in 1571.

Still, Suleiman did not dwell on his losses and soon extended his influence across north Africa at the expense of Charles V. He also famously made an alliance with King Francis I of France who was eager to have such a powerful ally in his own on-going conflict with the Holy Roman Emperor. His naval forces devastated much of Sicily and southern Italy in cooperation with the French but the campaign was marred by the failure to take Malta which narrowly managed to hold out against the Ottoman forces until a Spanish relief force arrived.

At home, Sultan Suleiman undertook a reform and simplification of the law, finally producing the famous code known as the “Ottoman Law” which was to be the law of the land in the empire for the next 300 years. He improved conditions for the Christians and Jews within his empire and made criminal punishments less cruel and decreased the number of capital offenses. The Ottoman Empire went through a flowering of art, literature and architecture during the reign of Suleiman I and the Sultan himself was quite an accomplished poet. One subject he wrote about was his famous wife Roxolana, a harem slave girl who he had broken with tradition to marry and elevate to the role of consort. It was a son by Roxolana that succeeded Suleiman I when he died in 1566 on his way to another campaign in Hungary.

It is a mark of the greatness of the reign of Suleiman the Magnificent that he was widely admired by friends and enemies alike. To his own people and his allies he was known as a wise and just ruler while his enemies had to admire his talent, wealth and power. Under his rule the Ottoman Empire reached a peak in both political power and cultural achievement. Rulers who came after him would build on the foundations he put down until the Ottoman Empire was the most powerful state in the western world.
Posted by MadMonarchist at 12:54 AM