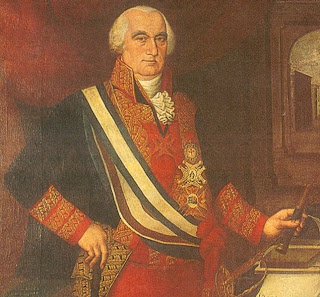 Jose Fernando de Abascal y Sousa, first Marquis of La Concordia was the Spanish Viceroy of Peru during the Latin American Revolutions. He was born into a noble family on June 3, 1743 in Oviedo in the Asturias in Spain. When he was 19 he joined the Spanish army where he had a rather uneventful career. After 20 years service he was promoted to colonel and during the war with France was promoted to brigadier general. In 1796 he defended Havana, Cuba against the British and later was named military commander of Nueva Galicia in what is now western Mexico in 1800. In 1804 he was named Viceroy of Rio de la Plata but before taking up the most was instead named Viceroy of Peru.

While on his way from Spain he was taken prisoner by the British and so did not take up his vice-regal duties in Lima until 1806. Once there he showed himself to be an active administrator, reforming education, the army and suppressing the first early rebellions against the Spanish Crown. He also undertook the first massive vaccinations of the people of Lima against smallpox but his efforts were fairly well resisted. He founded a medical school in San Fernando and dealt with an earthquake, a massive fire in Guayaquil and a very destructive hurricane during his time in office.

In May of 1810 Spanish South America was thrown into turmoil by the outbreak of revolution in Buenos Aires. Abascal responded by trying to extend his reach as much as possible and keep the widest area in royalist hands. He sent troops into what is now Bolivia, taking the area into the Viceroyalty of Peru, defeated a rebel army at huaqui, Alto Peru and took in modern Chile and Ecuador into the Peruvian viceroyalty as well. Although he was a staunch supporter of the absolute monarchy in Spain his patriotism obliged him to support the more liberal Cadiz Cortes in opposition to the invading forces of Napoleonic France. Because of the turmoil in Spain and the great distance between Europe and America he was able to effectively rule as he saw fit.

Under the leadership of Abascal Peru became the royalist stronghold of South America when revolutionary movements seemed to be breaking out everywhere. When the liberal Spanish Constitution of 1812 was put forward Abascal was having none of it in his viceroyalty and put down supporters of it with the same zeal that he had dealt with earlier republican rebellions. That same year he was given the title of first Marquis of La Concordia and with good reason as his forces launched a very successful campaign to restore royal rule throughout the region.

In 1814, in cooperation with a Spanish expeditionary force, Abascal dispatched 2,400 royalist troops under General Antonio Pareja to put down revolutionary uprisings in Chile. They rallied considerable support along the way from the southern part of the country where a greater number of people were loyal to the King. By the time he reached Chillan his force had swelled to 4,000 and the town surrendered without a fight and 2,000 more recruits joined the royalist army. All in all a resounding success but all his years of activity and dealing with disasters had taken their toll on Abascal and in 1816 he requested that he be relieved of duty and allowed to return home to Spain. This request was granted and Abascal died in Madrid in 1821 at the age of 79.
Posted by MadMonarchist at 12:18 AM