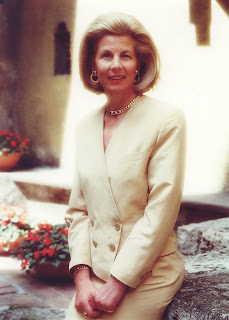 HSH Princess Marie of Liechtenstein was born Marie Aglaë, Countess Kinsky of Wchinitz and Tettau in Prague, Czechoslovakia on April 14, 1940. She is the fourth of seven children born to Count Ferdinand Carl Kinsky of Wchinitz and Tettau and his wife Countess Henriette, formerly Countess of Ledebur-Wicheln. Born into the Second World War her family had to flee Czechoslovakia in the face of the onrushing Soviet Red Army and settled in Germany. As a girl she attended elementary school in Ering am Inn from 1946 to 1950 before going to the Lioba Sisters’ boarding school at ‘Wald’ monastery in Wurttemberg.

Eight years later Marie graduated and in 1957 moved to England to improve her English language skills. She later went back to school and graduated from the Academy for Applied Arts at the University of Munich. To improve her French she lived for a time in Paris. With her studies completed she took a job as an industrial designer for a print shop in Dachau. Her career was on track but romance intervened and in 1965 she became engaged to HSH Hereditary Prince Hans-Adam II of Liechtenstein, a distant cousin. The two were married in Vaduz on July 30, 1967 and one year later, on June 11, Princess Marie gave birth to their first child; Prince Alois.

Motherhood kept Princess Marie busy and on May 16, 1969 Prince Maximilian was born followed by Prince Constantin on March 15, 1972 and finally Princess Tatjana on April 10, 1973. On November 13, 1989 the Hereditary Prince succeeded his father as HSH Prince Hans-Adam II, Sovereign Prince of Liechtenstein making Princess Marie consort to one of the last nearly absolute monarchs in Europe. The Princess of Liechtenstein has given her all to her country and people with particular attention to educational, cultural and artistic issues.

Princess Marie serves as the President of the Liechtenstein Red Cross and from 1983 to 2005 was Honorary President of the Society for Orthopedic Aid. She has undertaken numerous foreign trips to represent Liechtenstein abroad and takes an interest in all things related to her country from politics and economics to cultural and sporting events.
Posted by MadMonarchist at 12:27 AM