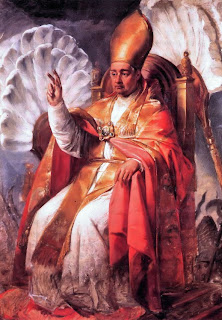 Not surprisingly Pope Gregory XVI is one of my favorites, not surprising because he was one of the most notably reactionary pontiffs in Church history. He was born Bartolomeo Alberto Cappellari on September 18, 1765 at Belluno to a modest but noble family. He entered the monastery when he was very young and was known from his earliest writings to be a staunch defender of orthodoxy though in time he would become most known for his political conservatism. This is not surprising given the times he was born into; Europe post-French Revolution. He saw the devastation inflicted on Italy by the revolutionary armies and the kidnapping of Pope Pius VII.

Once the Pope was restored in Rome in 1814 Father Cappellari rose further up the Church hierarchy becoming a councilor of the Holy Office of the Inquisition, prefect for the Congregation of the Propagation of the Faith and examiner of bishops. In 1825 Pope Leo XII created him Cardinal-Priest of San Callisto and soon after was sent to arrange a concordat with the Kingdom of the United Netherlands on the Catholic population of what would later become Belgium. Coming out of the French Revolution and the Napoleonic Wars he was a staunch enemy of revolutions of any sort, even when carried out by Catholics against non-Catholic rulers. Part of his diplomatic work included making peace between the Armenian Catholics and the Ottoman Sultan and to entreat the Catholics of Poland to remain loyal to the Orthodox Czar Nicholas I of Russia. It would do, after all, if the “Iron Czar” had to send troops to put down rebellions in Poland while he was supporting the cause of the Catholic royalists in France.

In 1830 Pope Pius VIII died and after 64 days of deliberations Cardinal Cappellari was chosen to succeed him, in 1831, taking the name Pope Gregory XVI. He was, incidentally, the last Pope to be elected without having been a bishop. He came to the Petrine Throne just after the Bourbons had again been driven from the throne of France and he was quick to assert his support for the “Old Order” as well as what would become known as ‘Ultramontanism’; the strengthening of the absolute authority of the Pontiff. As political upheaval grew in Italy, encouraged by events in France and looking forward to the Revolutions of 1848, Gregory XVI had to call on the Emperor of Austria to put down rebellions and restore order in the Papal States. Gregory XVI was effectively faced with his own “War on Terror”.

Pope Gregory opposed innovation of almost any kind and is probably most famous for his opposition to gas street lights and railways (something Czar Alexander III was also not wild about btw). All of which is obviously to his credit. He feared the rise of a liberal upper-middle class elite in the Papal States and opposed any sort of political concessions. Soon, Gregory XVI was perhaps the most hated man in Europe amongst leftist circles, not only in Italy but also in places abroad like Ireland where he urged Irish Catholics to be loyal to their Protestant British monarch. He sympathized with them naturally but his bottom line was absolute opposition to any revolution.

One of the telling statements of Pope Gregory XVI on liberalism was: “This shameful font of indifferentism gives rise to that absurd and erroneous proposition which claims that liberty of conscience must be maintained for everyone. It spreads ruin in sacred and civil affairs, though some repeat over and over again with the greatest impudence that some advantage accrues to religion from it. "But the death of the soul is worse than freedom of error," as Augustine was wont to say. When all restraints are removed by which men are kept on the narrow path of truth, their nature, which is already inclined to evil, propels them to ruin.” Obviously liberals within the Church and without regarded him as a horrible reactionary.

However, Gregory XVI does not often get credit for his other positions, for instance, his signing of the apostolic constitution condemning slavery in 1839. He was also a generous (some would say too generous) a patron of the arts, architecture and completed a number of defensive and engineering reforms for the city of Rome. He was also an extremely compassionate man who pardoned a great many criminals who had opposed him -and would continue to oppose the Papacy in the future- but he also had no qualms about putting those to death who crossed the line into violent rebellion. He was strict but fair and always made it clear where the line was that could not be crossed. Contrary to popular belief he did carry out a number of reforms in the Papal States but he would never allow for popular election or any laymen holding office on par with the Sacred College as some urged. His Holiness died on June 1, 1846 and was succeeded by Pius IX who would have to face the full force of the enemies Gregory had tried to fend off.
Posted by MadMonarchist at 12:17 AM