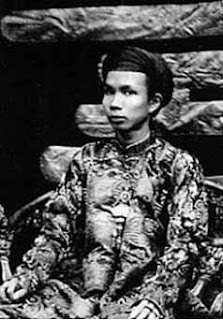 Prince Nguyen Canh Tong was born on February 19, 1864 the son of Prince Nguyen-Phuc Hong Cai. His uncle, the Emperor Tu Duc, was the longest-reigning emperor of the Nguyen dynasty and was known for his numerous beautiful wives and concubines. However, a bout with smallpox as a child had left Tu Duc sterile and so he adopted three nephews to secure the succession, the eldest of which was Nguyen Canh Tong whom he elevated to the rank of Duke of Kien Giang. It is still debated by Vietnamese historians which nephew Tu Duc intended to be his immediate successor but in the tumultuous year of 1883 one crisis after another following the death of Tu Duc made it become known as the “Year of the 3 Kings” as Nguyen Duc Duc, Emperor Hiep Hoa, Emperor Kien Phuc and Emperor Ham Nghi all gained the throne and lost it.

On July 4, 1885 an anti-French uprising was launched by the regents of Vietnam and the reigning boy-Emperor Ham Nghi fled (or was kidnapped) to be the figurehead of their movement. Citing Vietnamese law that the country could not be one day without a king the French, with the support of most of the royal family, enthroned Nguyen Canh Tong as Emperor Dong Khanh. This was a difficult and delicate time for the Nguyen dynasty as Emperor Dong Khanh knew that it was only because of the French that he had achieved the throne. As a result, he determined from the start to be friendly and cooperative (if not always enthusiastic obviously) with the French as their destinies were bound together.

Emperor Dong Khanh dispatched loyal Vietnamese troops (under his father-in-law General Nguyen Than) to assist the French in suppressing the anti-French uprising known as the Mandarins Revolt. Since the rebellion was aimed at foreigners the Christian community was often singled out for persecution, perhaps even more so after Emperor Dong Khanh issued an edict of religious toleration for the first time since the reign of the first Nguyen Emperor Gia Long. It was an attack by rebel forces on the Catholic Church at Tra Kieu which led to the appearance of the Blessed Virgin Mary whose miraculous intercession ensured a victory for the forces of Emperor Dong Khanh. To this day the second most enduring Christian icon in Vietnam is Our Lady of Tra Kieu.

The French did give Dong Khanh some concessions for his cooperation, but in reality the changes were merely administrative rather than a real change in sovereignty. Whereas the French praised Emperor Dong Khanh very highly for his friendly attitude he was less popular with his own people as a result. He undertook a tour of north-central Vietnam at the behest of the French to promote Franco-Vietnamese cooperation but was met with such hostility that he was forced to call it off and return to the Forbidden City in an armed fleet of junks. It was also during this time that the French Union of Indochina was formally established, creating one colonial entity of Laos, Cambodia and the three areas formerly known as Vietnam; Tonkin, Annam and Cochinchina. The rebel forces were finally defeated but Emperor Dong Khanh (in whose name the often brutal suppression was carried out -increasingly his unpopularity) did not live to see it.

Emperor Dong Khanh, long troubled by illness and dependence on medication, died on January 28, 1889. His relatively short reign being taken by many as a sign of divine disfavor. For France at least he had been the ideal colonial monarch in the grand, worldwide French imperial system. He had carried out his moral and spiritual duties as Vietnamese emperor and the Son of Heaven while maintaining a policy of peace and friendship with the French who handled all major political decisions. They were troubled though by the fact that half of his eight children died very young and that the Emperor, before his life was cut short, suffered from various illnesses and hallucinations. Because of this, they were reluctant to allow his son and heir to succeed him on the throne. They decided to go in a different direction but would eventually come to regret the move. In time though his son would come to the Golden Dragon Throne as would his grandson who would go down in history as the last Emperor of Vietnam. Even after the era of the republic the line of Emperor Dong Khanh continued for a time as it was his great-granddaughter who would become famous as Madame Nhu, the “Dragon Lady” of South Vietnam.
Posted by MadMonarchist at 12:24 AM