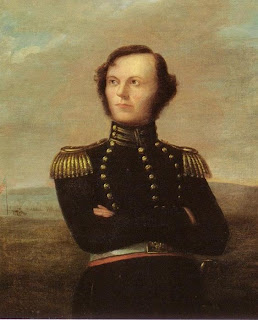 It was on March 27, 1836, Palm Sunday, that was to prove the most infamous day in the history of Texas. The War for Independence looked to be going very badly. Ever since General Santa Anna, President of Mexico, had launched his counteroffensive to retake Texas from the rebel forces his army had been everywhere victorious. While Santa Anna wasted lives in assaulting the Alamo, General Jose Urrea marched up the coast, defeating a number of smaller Texas units on his way to the old presidio at Goliad, renamed Ft Defiance by the Texans where the main Texas army waited under Colonel James Fannin (above). At the last minute Fannin abandoned the fort and marched north but was overtaken in the open by the elite Mexican cavalry. The Texans formed a square and fought off a number of attacks as Urrea and his main force arrived. Surrounded, cut off from water and with little food or ammunition Fannin finally surrendered on the promise from Urrea that he and his men would be treated as prisoners of war. However, for Santa Anna this war was a war of annihilation. After Urrea had continued north Santa Anna sent orders to the commander at Goliad to execute all of the Texan prisoners. A night of heated debate followed before the Mexican officers decided that Santa Anna's orders had to be obeyed and Urrea's ignored. At 8 o'clock in the morning some 350 to 400 unarmed Texan prisoners were marched out of the presidio, told to kneel on the ground and shot at point blank range. Survivors were bayoneted, clubbed to death or chased down by the Mexican lancers. The wounded men who could not walk were carried out and placed by the wall of the chapel and likewise shot. Colonel Fannin, too badly wounded to stand and refusing a blindfold, was seated in a chair and shot after being forced to witness the death of his men.

General Urrea was outraged when he heard what had happened in his absence but not nearly so much as the Texans, the US and most of the civilized world was. "Remember the Alamo" and "Remember Goliad" became the battle cries of the Texan forces who were more determined than ever to fight on to ultimate victory and despite the circumstances of the war, because of the actions of Santa Anna and his refusal to take prisoners, and particularly the massacre at Goliad the Mexicans would forever after be painted as the villains in world opinion.
Posted by MadMonarchist at 12:01 AM