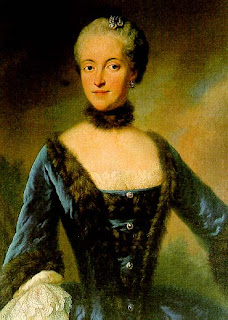 Maria Josepha of Bavaria was the second wife and Empress consort of the Holy Roman Emperor Joseph II. She was born Marie Josephe Antoine Walburga Felicitas Regula in Munich, Bavaria on March 30, 1739. Her father was the Holy Roman Emperor Charles VII, of the House of Wittelsbach, Prince-Elector and Duke of Bavaria. Her mother was Maria Amalia of Austria. She married Archduke Joseph of Austria, King of the Romans on January 23, 1765 in Vienna. It may have looked like a good match, the daughter of Emperor Charles VII marrying the heir of Empress Maria Theresa of the Holy Roman Empire, but in fact it was ill-fated from the start and there was little Maria Josepha could do about the situation.

Joseph had previously been married to Isabella of Parma who had died in 1763, who he had adored, as had most everyone. The rather difficult “enlightened despot” was heartbroken and had not wanted to remarry at all but Empress Maria Theresa was adamant that her son take another wife and produce an heir to the Hapsburg throne. Maria Josepha came to Austria in the shadow of Isabella and she could never hope to take her place. Going into the marriage reluctantly, Joseph criticized his new wife for her weight and her bad teeth but also admitted that her character was “irreproachable”, that she did love him and that she had many admirable qualities. Yet, Joseph declared it a pity for all of that as he simply had no love for her in return.

If Maria Theresa had pushed the marriage to obtain an heir she was to be disappointed. Joseph always kept Maria Josepha at a distance and it is doubtful that their marriage was ever even consummated. He went to considerable lengths to stay apart from her and avoid even having to see her. Maria Josepha suffered on under these conditions which did not improve in 1765 when her husband became Emperor Joseph II and she became Holy Roman Empress beside him. Whereas ordinarily she would have the place of ‘first lady’ in Vienna, that post was still very much filled by the formidable Empress Maria Theresa, a very religious and conservative woman, who distrusted the more liberal “enlightenment” tendencies in her son.

It would be tempting to think that Joseph II and Maria Josepha could have, over time, grown closer and perhaps had at least some sort of workable relationship. Alas, it was not to be as after being married for only about two years the Holy Roman Empress Maria Josepha died of smallpox, the very same disease that had taken the life of Archduchess Isabella. At the same time Empress Maria Theresa was sick with the disease, though thankfully she survived. Sadly, even in her final days the Emperor did not visit his stricken wife. It would be pleasant to think that Joseph II was too overcome with grief due to memories of his previous wife to deal with it, but the obvious answer cannot be ignored; that he had never desired Maria Josepha as his wife nor did he ever really accept her as such. She died on May 28, 1767 and in the aftermath Joseph II (who did not attend her funeral) claimed part of Bavaria on the basis of his marriage to the late Bavarian princess which led to the War of Bavarian Succession.
Posted by MadMonarchist at 12:14 AM