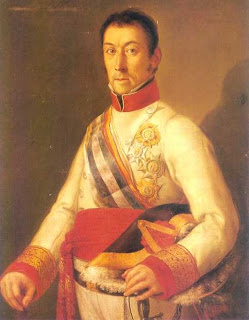 Another of the noted Spanish royalists during the independence wars in Latin America was Francisco Javier de Elio, born in Pamplona in 1767. Like many of his class he joined the Spanish Royal Army as a young man and advanced to become governor of Montevideo from 1807 to 1809. However, he was setback somewhat after conspiring against his superior, Santiago de Liniers, Viceroy of the Rio de la Plata which failed because of the popular support Liniers had for his past victories over the British and the support of future revolutionary Cornelio Saavedra.

However, the following year the newly appointed Viceroy, Baltasar Hidalgo de Cisneros, was deposed by the May Revolution. Elio stepped in to fill the breach, retaining control of Montevideo and what is now Uruguay while declaring himself Viceroy. A bit ambitious perhaps but in light of the situation the Junta of Cadiz confirmed his new post on January 19, 1811. The situation soon became worse as the peasants of Uruguay were incited to rise up in revolt under the leadership of Jose Gervasio Artigas. Elio dispatched naval Captain Jose Posadas with a force of royalists to put down the rebellion but his forces were defeated at the battle of Las Piedras.

In quick order the area under the effective control of Elio was Montevideo and Colonia del Sacramento. The Spanish cause doomed, Elio saw no choice but to return to Spain on November 18, 1811. He officially resigned his nominal post of viceroy in January of the following year. However, there was still need for royalist commanders in Spain as the return of His Catholic Majesty King Fernando VII was met with division between the Cortes who wanted the King to restore the liberal constitution of 1812 and the more staunch royalists who supported a return to the absolute monarchy. King Fernando VII naturally favored the full restoration of his powers and avoided confronting the Cortes in Madrid by going to Valencia where General Elio pledged his support and his troops to the King in returning him to absolute power.

Part of this was the prospect of restoring his own reputation for General Elio as Fernando VII was also committed to the reconquest of the recently lost colonies in America. Calling on his fellow monarchs of the Holy Alliance for support, royalists in France responded with His Most Christian Majesty King Louis XVIII dispatching a French army to intervene on behalf of his Spanish cousin. The result was the Spanish Civil War of 1820-1823 in which General Elio was zealously active on the absolutist side. The war ended in victory for the King of Spain, though the war itself meant that the Latin American colonies were effectively gone for good, but General Elio did not live to see it. Captured by the liberal forces he was executed in Valencia in 1822.
Posted by MadMonarchist at 12:36 AM