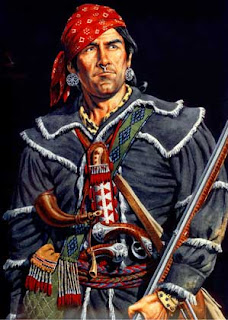 One of the characters I find most fascinating from the American Revolutionary War is also one of those most vilified in the popular media. That man is Simon Girty, aka “the White Savage”. Thanks to contemporary revolutionary propaganda and the work of many famous fiction writers and even filmmakers, Simon Girty, when he is remembered at all, is most often remembered as one of the most infamous villains in American history. However, take a short trip north to the Dominion of Canada and you will find a more ‘fair and balanced’ view of this frontier loyalist. Although they can be fun, Daniel Boone movies should be taken with a grain of salt as history.

Simon Girty was born in Pennsylvania in 1741. His father was an Irish Indian trader who was killed in a duel in 1750. The family was later taken prisoner by the Shawnee and Delaware during the French & Indian War. Some members were liberated by the British army but others, including Simon, were split up among different tribes. Simon Girty went to the Senecas and was adopted by them. Over time he became fluent in a number of Indian languages and was eventually hired by the British Indian Department at Fort Pitt.

In 1775 Girty joined the Virginia militia and was originally on the side of the “Patriots” and was hired as a sort of liaison between the Continental Congress and the Six Nations. Simon Girty went on to other further service with the Continental Army in a number of campaigns on and away from the frontier but was often snubbed, denied promised promotions and witnessed Continental troops massacre Indians whose tribes had given their support to the fledgling USA. This and the fact that it was clear the US intended to move west to settle lands Britain had reserved for the Native Americans finally prompted Girty to defect to the British side in March of 1778. He went to Detroit, Michigan and was again employed by the Indian Department as a go-between with the local tribes.

It was during this time that Simon Girty gained his unsavory reputation in the American press as he participated in Indian raids against American settlements. The fighting was harsh to be sure and Native American warfare was not the same as that in Europe. However, contrary to revolutionary propaganda, Simon Girty saved the lives of many captives who would have otherwise been killed. Simon Kenton was one of those saved by Simon Girty and he tried to save Colonel William Crawford but his pleas finally angered the Indians to the point that they threatened to have Girty take his place if he did not desist. In spite of these facts he was accused by the rebel press of being an active and enthusiastic participant in these executions.

Simon Girty aided the British throughout the frontier in raids on colonial outposts as well as at the victory over the Kentucky militia at the battle of Blue Licks. The US put a $1,000 price on his head but he was never captured and at the end of the war bought a farm in Canada. He served the British in their dealings with the Indians in the post-war years but these uprisings were defeated by the US. His health began to fail him and during the War of 1812 one of his sons died saving the life of a British officer. American papers resurrected the memory of Simon Girty during the War of 1812 to again make him the face of British and Indian savagery but by that time Girty was old, sick and nearly blind. He died in Canada in 1818, still one of the most hated men in America despite the fact that there is not a shred of evidence that he ever actually participated in any atrocity. The only thing he was “guilty” of was returning to loyalty to his King and fighting to defend the lands and rights of the American Indian community.
Posted by MadMonarchist at 12:39 AM