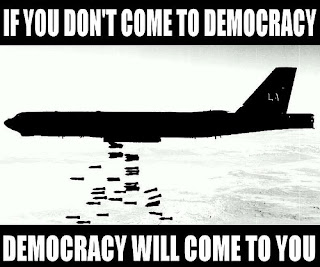 If one were to take a look at the history of Democracy one would be surprised at how the government of " Freedom" has little tolerance for the choices of other nations that do not correspond with theirs. Starting with the Athenians. The Athenians were well known for not willing to cooperate with other city states on charges that they were not democratic enough. Because of this stubbornness they ended up causing and losing the Peloponnesian War. This attitude of self rightesnous has survived through out the centuries. It is the attitude that defines arrogance. For these people it is not good enough to have their own country adopt such forms of government. They demand that everyone follow suite or they are evil and anyone who wants to associate with them is evil also. Surprisingly enough Democracies who often claim to be for the free choice usually develop such attitudes over time. I cannot name a single war that A Monarchy has began to force it's ideals on other nations. During WWI U.S president Woodrow Wilson did not enter the war until Tsar Nicholas II was overthrown. That way it could be an ideal Democratic crusade against the " evil" German and Austrian monarchies. Mr. Wilson clearly forgot that George Washington told the american people before exiting office to not get involved in european wars. Or that John Adams said not to go abroad looking for monsters to slay. No, Wilson was determined to push forth his radical League of Nations agenda. He wanted to create a New world order in which any nations who wished to have different form of government than what Wilson wanted would be forced to abandon their Monarchy by force or by economic sanctions.When the war was one the Central Powers were torn into shreds by the treaty of Versailles. While Russia (which was an ally) was hardly represented although out all the allied powers it spilled the most blood. During the russian civil war Woodrow Wilson sent troops to help Kolchack. They however did not move much farther than the Vladivostok where they had been sent. This was because Wilson secretly detested Kolchack for he feared that he would restore the monarchy. He was less concerned with stopping the communists than stopping his ally! This was also shared by President FDR who was just obsessed with taking down the British Empire as he was with taking down Hitler! Today the members of NATO and the EU still are bloody obsessed with taking down any nation they deem under democratic. I believe in national sovereignty . The right that every nation has the right to make its own decisions. If nation wants to have a democracy than it's their decision . However they do not have the right to tell other nations what forms of government they can and cannot have.
This article was written by The Black Baron, the purveyor of the new network website "Monarchist Manifesto". Monarchists are welcome to sign up and contribute.
Posted by MadMonarchist at 12:29 AM