The Pope a Target? 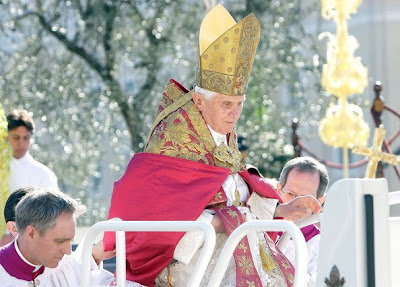 HH Pope Benedict XVI opened Holy Week with the Palm Sunday mass in St Peter's square in the Vatican but in all the news coverage His Holiness' actual religious message was overshadowed by continuing accusations of clerical abuse in Europe, particularly in Ireland and Germany. Is it not odd how all of this comes about just as such similar controversy had died down in the United States. One might think that if people were going to come forward with decades old claims they would be encouraged to do so when others are doing the same rather than waiting until it dies down on one continent only to flare up in another -so that the controversy never ends. But enough about that -that's for a religion blog somewhere to cover.

What has captured my attention in all of this is the calls for the Pope to "resign" (to be correct; abdicate) over these latest scandals. So far these have only come from what a Vichy French police captain would call the 'usual suspects'; secularists, enemies of the Church, the liberal media etc. However, what I find disturbing is that this is not a new suggestion. Readers will recall that when the late Pope John Paul II was near the end of his life and quite infirm there were calls from these same people (all sounding very sympathetic and concerned of course) that John Paul II abdicate as well. Now, they want Benedict XVI to abdicate because of accusations that the Church in Europe has a number of degenerate clerics.

Why is it that all of a sudden, no matter what the problem or situation the "answer" is always for the Pope to abdicate. Is it just me or does it seem like something that would have been absolutely unthinkable only a few years ago keeps being suggested as a 'proper response' to everything? Okay, fair warning, here is where the Mad Monarchist is going to head home to CrazyTown. Could it be that these anti-religion types are simply desperate for the Pope, this one, this last or a future one, to abdicate simply so that the precedent will be set? If such a thing were to happen it would, one could imagine, make it easier for a Pope to pushed aside or done away with.

We have already seen republicanism on the rise in Sweden, attemps on the life of the Dutch Royal Family, calls for the succession in Belgium to be changed, the Grand Duke of Luxembourg stripped of his role in government, bi-partisan opposition to the Spanish monarchy and the republicans in the UK admit that they are simply waiting for the Queen to go to her reward to make their move. The Pope, however, cannot be silenced or influenced and the attempt to kill John Paul II failed and now we have increased calls for abdication. So, if in the future the Pontiff (who is always difficult for the revolutionary crowd) is shuffled off the scene the reason can be given that he abdicated for some reason or another and it is 'no big deal' because abdication has been done before and is nothing out of the ordinary. Call me mad, call me paranoid (and medical opinion would be on your side) but I cannot help but wonder......
Posted by MadMonarchist at 12:15 AM