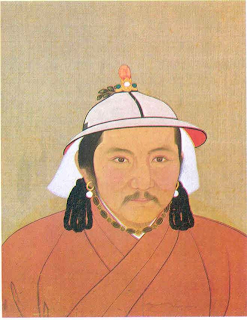 Khaishan Khan was the second Emperor of the Yuan dynasty after the great Kublai Khan. He was born in 1281, the second son of Darmabala and Dagi of the powerful Khunggirad clan and the brother of Ayurbarwada (a future Great Khan). In his youth he was given command of the army in Mongolia that defended the Yuan Empire against raids from Central Asia. One of his most formidable enemies in this arena was Kaidu, a great-grandson of Genghis Khan and long standing enemy of the Yuan going back to the reign of Kublai with his force of mostly Muslim central Asian warriors. In 1289 Khaishan was defeated by him and nearly killed but in 1301 Kaishan defeated Kaidu who died from his wounds. Temur Oljeitu Khan awarded Khaishan the title of Prince of Huaining in 1304 in recognition of this victory.

Victories over other enemies earned Kaishan a great reputation among the Mongol princes and the Mongol and non-Mongol soldiers alike. When Temur Oljeitu died with no male heir his nephews were left to struggle for the throne. Khaishan emerged victorious and successfully assumed the position of Great Khan of the Mongols or Emperor Wuzong of the Great Yuan in 1308. After a rather rough coming to the throne he named his brother Ayurbarwada Crown Prince and heir to the throne. He also had a treatise by Confucius on the duty to obey family superiors and by extension the emperor translated into Mongolian and distributed throughout the empire. However, his reign was to be very unlike traditional Chinese styles.

Khaishan Khan had come up and gained his fame as a nomadic warrior on the steppes of Mongolia and that is how he ruled the Yuan Empire. He had never been trained in the art of statecraft and acted as a traditional Mongol chieftain on an exceptionally large scale. He lavished gifts on the Mongol princes and high officials, spent vast sums on the construction of new Buddhist temples and palaces. Rather than confine himself to the established bureaucratic class he appointed new officials from a variety of backgrounds, Buddhist and Daoist priests, actors, butchers, artisans and so on. To keep the economy afloat he sold licenses in the state monopolies and tripled the amount of paper money which naturally led to high inflation.

This, combined with the greater military spending he naturally favored made Kaishan Khan very popular amongst the Mongol princes but increasingly unpopular with the Han Chinese. He did show favoritism toward the Buddhist religion but was also the first Khan to have the Buddhist and Daoist clergy pay taxes. Most of the military spending went to defending the borders but there was some small expansion when his forces completed the conquest of Sakhalin island. With the continued financial problems he carried out his long-standing wish to restore hard currency with the issuance of new copper coins but this still had little effect. Khaishan Khan died in 1311 after only about three years on the throne and, as planned, was succeeded by his brother.
Posted by MadMonarchist at 12:25 AM