New Numbers on the King of Sweden 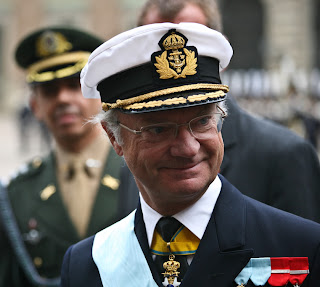 HM King Carl XVI Gustaf of Sweden has reason to smile. New polling asked if the monarch, creeping up on 65-years-old (retirement age in Sweden) shows that 2/3rds of the Swedish population support the King of Sweden reigning until his death. Not surprisingly Swedes who categorize themselves as leftists are more likely to prefer the King abdicating in favor of Crown Princess Victoria whereas those Swedes who categorize themselves as "center-right" are more inclined to want the King to stay for life. What struck me as a bit unusual was that Swedes living in smaller towns were more likely to support the King abdicating next year whereas those living in the big cities are more inclined to support the King remaining on the throne. I would have expected the reverse to be true.

Fortunately, of those polled 74% said they supported their monarchy while 19% thought it should be abolished and the country become officially republican -and that is 19% too many! As I have often said, such numbers, while comforting, cannot be an excuse for inaction as the same study also showed that whereas only 19% of the public in Sweden are republicans, a much higher percentage of politicians are! No numbers were listed but for republicans making up such a small percentage of the population, a much larger number of the members of parliament have been open and vocal about wishing Sweden to abolish the monarchy and become a republic.

This means one thing; the Swedish people need to see to it that these MP's are not reelected in the future. It also shows that the democratically elected representatives of the people are obviously not reflecting the views and values of the people who put them in office. Finally, this shows what becomes of those who bargain with liberal revolutionaries. There is hardly a country in Europe more liberal, more socialistic than Sweden and the King has a purely ceremonial position with absolutely no emergency or reserve powers at all anymore. Yet, those who are hard-core revolutionary types will never be satisfied so long as any monarch is on their throne, no matter how powerless or benevolent they may be. Good enough reason in my book to stop negotiating with their types altogether.

Long live the King of Sweden!
Posted by MadMonarchist at 12:30 AM