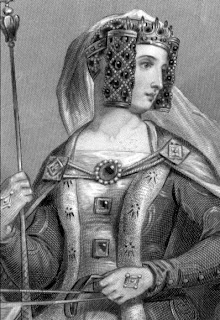 Philippa of Hainault was born on June 24, 1311 in what is now Flanders but which was then part of France. Her father was the Count of Hainault and her grandfather was King Philip III of France. When she was 16 she married the famous English King Edward III on January 24, 1328 at York Minster less than a year after he came to the throne. In cases like this the standard procedure was for a foreign consort to come to a new country, understandably trying to bring as much of her homeland along as possible, was instantly unpopular and would have to work very hard over time to win the love of her people. Queen Philippa is an example, however, of when this did not happen. She did not bring a small army of French attendants with her when she came to England and French officials would never be an especially large presence in the court of Edward III. As such, she enjoyed a great deal of popularity right away which was increased when she gave birth to an heir to the throne (another Prince Edward) nine days before she turned 19. In short, she got off on the right foot and was off to a great start.

Queen Philippa was a very devoted wife and was known for her kindness and compassion, her gentle care for all those around her. Yet, she was also quite a tough lady and when her husband went on his military campaigns, whether in Scotland or Flanders, she went along with him. When she did not go with him she proved a capable regent, ruling in his absence. She was an excellent counter-balance to her fierce husband, famous as a warrior king. When he besieged and captured the city of Calai he first intended to have the leading merchants executed as an example to the populace but Queen Philippa interceded for them and convinced her husband to spend their lives. It was probably the most famous example of her influence of compassion.

To the people of England she was a mother to the country, not especially beautiful as time went on, but always adored for her care and concern for their welfare and for her motherly role in her own family. Over the years she gave Edward III 14 children and sadly outlived all but 9 of them. She lost 2 during the Black Death which was a terrible time in which her own special character was of great value. Edward was not always as good a husband as he should have been, but that made Queen Philippa all the more popular that in spite of the occasional adversity she remained a faithful, loving and supportive wife and mother and as a result their marriage of 40 years was, by all accounts, a very happy and successful one. Queen Philippa died on August 15, 1369 in Windsor Castle and was buried in Westminster Abbey.
Posted by MadMonarchist at 12:50 AM